I just this minute found out that American masculinity is “in crisis.” I learned this from an article—written by a... 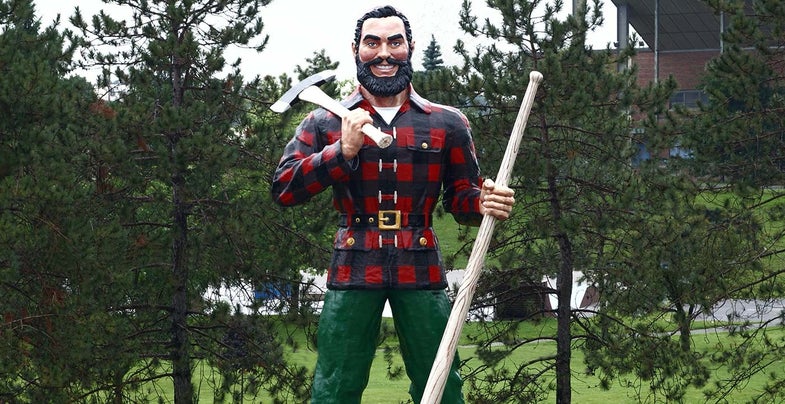 I just this minute found out that American masculinity is “in crisis.” I learned this from an article—written by a woman—in The Atlantic.

I wish I’d known earlier. I’d have stocked up on beer, flashlight batteries, and…actually that’s pretty much covers it.

The way we American men are coping with the crisis is by dressing up as…lumberjacks. I’m serious. Those of us who do so are called “lumbersexuals”—a word coined recently at GearJunkie.com. (Don’t bother. It’s mostly gear for people who don’t get out much.) To qualify, you grow a beard and dress in overalls, plaid shirt, and work boots. Amazingly, this—minus the beard—is pretty much how I always dress. Mostly because these are the clothes on the floor closest to the bed. And because I’ve turned the thermostat down to 58 degrees to save money.

But—and here’s the catch—you have to wear these duds with “an unashamedly ironic grin.” If you know what this is or how to do it, please let me know. I’m dying to learn it.

But I digress. Let’s get back to the crisis. As the article states, “White men are often portrayed as continuously jittery, always on the edge of losing their birthright.” (I lose everything else, so I’m sure I lost my birthright, too. But, again, I’d like to know what it is.) And what better way to settle the nerves of jittery men than dressing like Paul Bunyan, the original lumbersexual. Who, incidentally, was himself created by journalists and advertisers in the late 1800s. Which, according to the lady in The Atlantic, was another time that American men were “in crisis.” That time it was because the Industrial Revolution had condemned average guys into “clerical jobs in dingy offices” where they performed “too much brain-work.” This led to neurasthenia, “the overtaxing of the nervous system, a sort of male hysteria.” Who knew?

The article doesn’t say what men back then did to cure their crisis. But that’s when the “lumberjack aesthetic” dates from.
Anyway, I thought we should all be aware of this. Maybe we should create a support group. We could call it Men In Crisis Who Don’t Know It Because They’re Too Busy Hunting, Fishing, and Making a Living. Or MICWDKIBTTBHFML for short. Which I would pronounce “Mik-Wad-Kibbit-Bah-FIMIL.” Accent on the last syllable. And spoken with an unashamedly ironic grin.