Rental boats from Fletcher’s on the Potomac. My friend Gordon Leisch turned 80 a few weeks ago. Gordon is a... 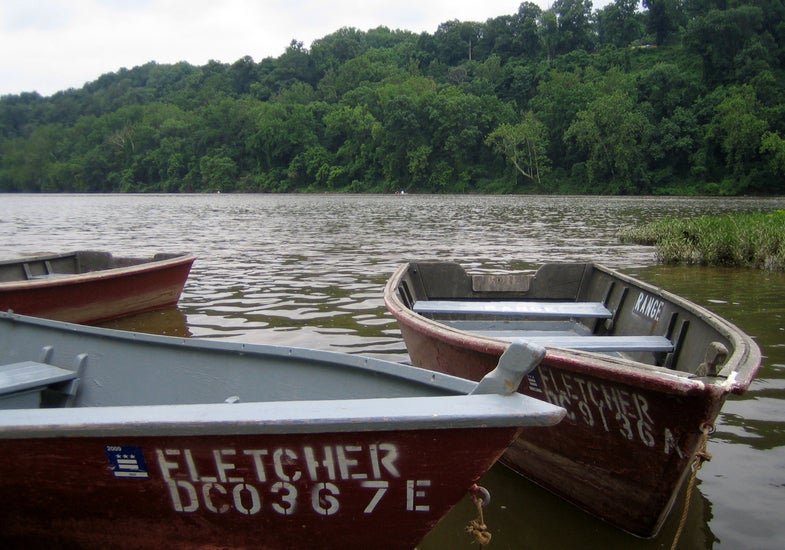 Rental boats from Fletcher’s on the Potomac.

My friend Gordon Leisch turned 80 a few weeks ago. Gordon is a gentleman of the old school. He used to get on a bus near his house with a disassembled shotgun in a shopping bag, go hunt squirrels, and come home the same way. All well inside the Beltway. “Heck, I can remember when there were places you could sight in a deer rifle inside the Beltway.”

Now that I live 70 miles away, I don’t see Gordon as often as I used to. I missed the small party his friends from Fletcher’s Boathouse had at Danny Ward’s house. It’s one of the few parties I would have liked to attend.

Gordon remembers when people would drive down from Pennsylvania to fish the Potomac’s prodigious runs of shad and herring. “They’d bring barrels. Put down a layer of fish, layer of salt, and keep doing that until the barrel was full, go onto the next one. Then they’d have fish all year.” He remembers the days when a tackle shop was precariously cantilevered out over the C&O Canal and the river from Chain Bridge. The place rented out 16-foot snagging poles strung with carpenter’s plumb line and a big treble hook. “You’d stand out in the river on a rock—you might have to wait a while for the good ones—and snag fish until your arms couldn’t take it.” There was often a man on shore who bought fish for a penny apiece.

For more than 60 years, Gordon has kept a notebook of the Potomac’s various migratory species—herring, shad, white perch, and rockfish. It’s a treasure trove of data, recording when the fish arrived, how many fish he caught each outing, what he used, river conditions, and when the fish departed back to the Bay.

Rivers die silently. It’s only by looking at hard data like Gordon’s that you realize how much has been lost. Runs of fish that lasted for months now sometimes last only for days. Some years they no longer happen at all. I once asked him about a phrase I kept coming across in historical accounts about the Potomac. It was so productive that it was said “the river ran black with herring and silver with shad.” I asked whether this was accurate or poetic license.

I felt bad that I hadn’t been at the party. When a man turns 80, people should make a fuss over it. Gordon has good genes. His dad lived well into his 90s. He keeps himself in good shape and faithfully does physical therapy for a rotator cuff injury. A couple of years ago, a woman on a bicycle on the towpath ran him over in broad daylight on a weekday afternoon. She was looking at her phone or something. It’s his rod arm, and he wants it functional.

The other day, I stopped by to ask if I could borrow a bay rod for a rockfish charter I’m going on this weekend. He said sure, went downstairs and came back up with a Penn Power Stick and an Okuma Convector reel spooled with 30-pound mono.

That’s when I gave him a bottle of Glenmorangie and wished him a happy birthday. “Damn, bud,” I said. “I used to feel like you were older than me. Now it’s getting so we’re practically the same age.” We shook hands. I hope my grip is that strong when I’m 80.