It’s March. There shouldn’t be snow on the ground in this part of Maryland at this time of year. And... 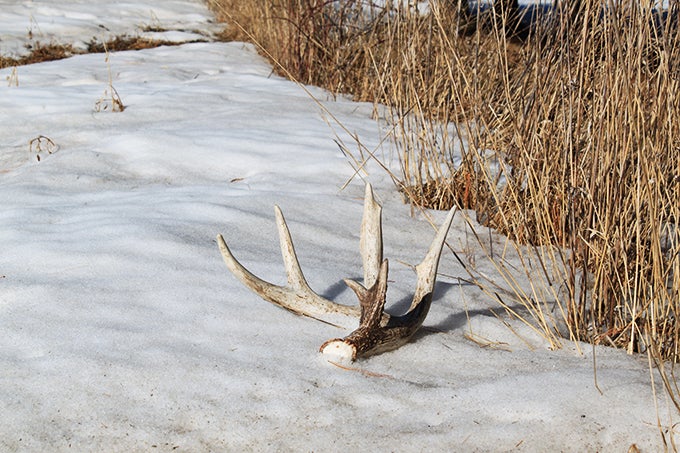 It’s March. There shouldn’t be snow on the ground in this part of Maryland at this time of year. And as I write this we’re supposed to get another 7 to 10 inches. Yesterday, school was let out early, again, due to sleet that quickly froze to ice on the roadways. When this sort of thing happens in D.C. most people have the good sense to panic, hop in their cars, and tailgate each other at 70 mph, as if they couldn’t wait to crash. The survivors descend with sharp elbows on the grocery stores for the supplies needed to face the apocalypse: milk, bread, and toilet paper.

I finally lost it yesterday about the time the sleet started. I’d been holed up for days and was wondering how many bottle rockets it would take to lift one of the neighborhood cats off the ground. Big wet spit fell from the sky, onto an existing 4 inches of snow that had melted and refrozen so many times it was like white armor. It would, I realized, take a special kind of fool to go shed hunting on such a day. Fortunately, I knew just where to find him.

I bundled up and headed down a bike trail to a hill that’s always loaded with sign. Sure enough, there were tracks, trails, and beds low and high. The only two-legged tracks were the ones I was making. The crunch of my own steps was so loud I couldn’t hear, but behind some tracks lay freshly exploded snow atop the crust of old stuff. I’d obviously bumped some deer right off their beds. I wove my way up the side of the hill and came across an old platform in a tree that had all but finished eating the screw-in steps. The steel stubs that remained were half the length of my little finger.

I kept looking for sheds—anything that matched my search image of a tine, the particular curve of a beam, the right color. But I noted that I was paying more attention and deriving more pleasure from just studying the land itself. Seeing how it worked. Where its contours gently pushed any animal—deer or man—up or down the hill. Which benches had the most-used side trails. How every so often I’d come to one gulley, among many, that was free of snow, because of the direction it faced and because the thinner canopy on the knoll just south of it let in more sun. The deer sign was invariably thicker in these places. I saw a pile of fresh wood shavings at the base of a huge dead tree and wondered what had made it. Woodpecker? Did tree-dwelling owls excavate nests or just use existing cavities? I couldn’t remember. I studied a bench just off the top of a ridge 80 yards off and thought about which part of it I’d bed down on if I were a deer. I walked over and found half a dozen doe beds right there.

When the light faded, I turned back. I felt strangely content. And somewhat surprised. Contentment has never been my strong suit. Feeling it made me realize how long it had been a stranger. I tried to dope that out. The feeling of contentment wasn’t about the search for sheds. I think I was just happy to be alive, and in the woods—paying attention to them, immersing myself in them, trying to decode fragments of the detailed instructions written everywhere if you looked and studied. I was happy that I had legs so that I could escort my eyes wherever they wanted to go next.

Don’t get me wrong. I’m ready for winter to be over. But I bet I enjoyed that sleet more than anybody else for miles around.