Settling In to a New Home, Step 1: Find the Deer

Some suburban deer are easy to locate, but this isn’t what Heavey had in mind. My family and I have... 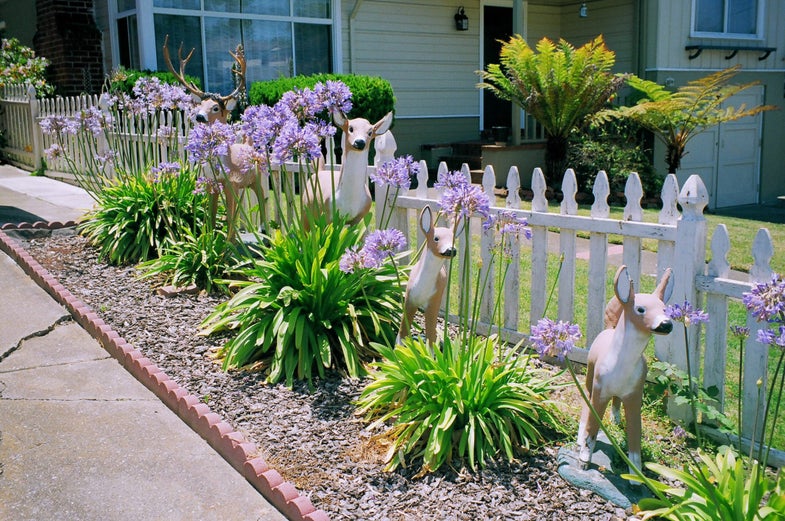 Some suburban deer are easy to locate, but this isn’t what Heavey had in mind.

My family and I have crammed ourselves into the cardboard box storage facility we call a “rental house.” I write this with my computer resting on a stack of three of Lowe’s Small (Pequeña) Moving Boxes. All four sides of every box carries the exhortation “Never Stop Improving.” This echoes the early but presciently stupid self-improvement mantra coined by a 19th century French apothecary, Émile Coué: “Every day, in every way, I’m getting better and better.”

I want to print up my own brand of moving boxes that say, “Hang In There. It Gets Worse.”

We are in the kind of housing development one finds all over the country. That is to say, one named after the things that were here before some developer saw it. It’s called Saddle Brook Farms or something like that. There is no farm, nothing to saddle, and if there is a brook, it runs through an underground pipe, which is where brooks belong for maximum economic return.

The first thoughts that run through my head when I walk out the door in any new place are these: Where are the nearest deer? In which direction? How far? What are they doing right now?

To find the answers, I knocked off the unpacking early yesterday and headed for the 40-yard-wide border of scrubland along the main road a quarter mile away. My instincts were good. Immediately, I ran into trails with fresh tracks, some pretty big. The trails braided in and out of the pines and the small stream by the road. What was strange was that nearly all of the prints headed in one direction. This suggests that if the deer came through daily, they were on a circular rather than linear route. I’ve seen this a few times before but not often. There was loud traffic 20 yards away on one side, the backyards of houses 20 yards on the other.

None of this seemed to bother the deer. There were three or four bedding areas and a good number of this year’s rubs, as well as older ones (including a small cedar that had recently been all but destroyed, which made me happy). There didn’t seem to be anything to eat along the way. It was a commuter trail. But the vibe I got was that the deer felt pretty comfortable using it. There was a fair amount of trash around, but it looked like stuff thrown from cars that might have gotten pushed deeper into the woods when the stream flooded. It wasn’t hunter trash. I didn’t see a boot print. Nor were there stands or evidence of stands from previous years. I did see one ladder stand in the backyard of a house. But it didn’t look particularly lethal. It went up a tree that wasn’t even fully in the woods and faced the house, as if whoever hunted it wanted to be able to see the TV while hunting.

The sun was going down. I headed back to the multitude of boxes awaiting me. But I no longer felt quite so alien to my new surroundings. I need to drive around some, look at aerial maps and see where the nearest remaining farm fields are. I need to know what’s up with those deer.