Shed Antlers, According to Paula

This time of year, Paula Smith hunts shed antlers the way other people go to work. She gets on a... 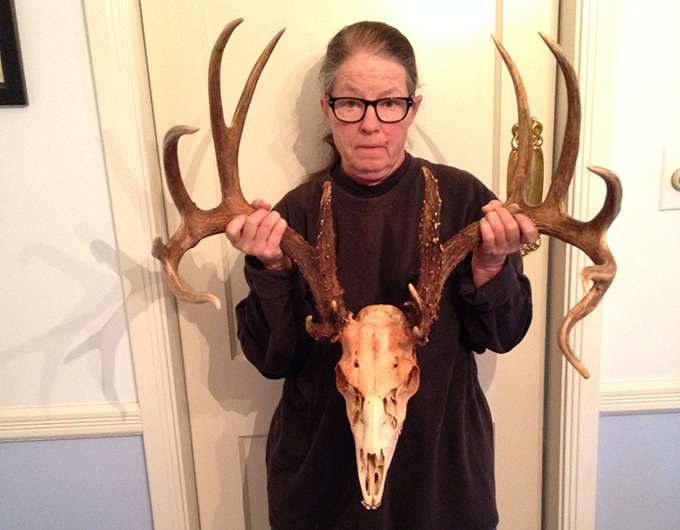 This time of year, Paula Smith hunts shed antlers the way other people go to work. She gets on a Metrobus as early as 5 a.m. and transfers two or three times to get where she wants to go. “But not today,” she told me over the phone. “Too much snow. Forget it!”

Paula has been shed hunting so long that she knows the family trees of some of the deer she keeps tabs on. Or claims to. “I’ve only found one set so far. Eight-pointer, nothing special. But he’s from stock that usually sheds early.” From anyone else, I’d have said this was bull. But I’m slower than I used to be to dismiss assertions like this one. I’ve seen her be right too many times.

“There’s another deer that I have one antler from. I think I know where the other one is, but I can’t go there. It’s government land, you know what I’m saying?” I do. It must be important government land, too, because otherwise she’d go. There are some monsters, for example, living on the vice president’s residence. But that’s not a smart place to trespass.

Paula thinks some deer are particularly careful about where they drop their antlers. “The old ones—7, 8—they’re pretty smart. Otherwise they’d be dead. Some of them know that leaving a shed means more hunters next year. I’m talking the big guys. They’ll stay where they were staging during the rut until both of ’em are down. Then they go home.

“I had one deer, used to drop his antlers in the @#$%ing river at low tide. Yeah, I’d find his antlers in the mud. I think he knew. He was really smart. Get rid of the evidence completely. I’ve also seen big bucks with one down knock the other off against a tree just to get rid of it. I mean, like, breaking the bone tissue off. You know the big buck I found dead?” (Pictured above.) “That guy hardly moved at all after his antlers hardened up. Completely nocturnal. Once, he dropped ’em, he’d go everywhere. Because he knew he was safe.

“You wanna talk to Gordon? He went to the store for ice cream. Yeah, we been cracking black walnuts all day. Cracked a $#*%load. What else you gonna do on a day like this?”