I finally got one. A whitetail deer, I mean. And, as I’m headed to Kansas, Land of the Giants, on... 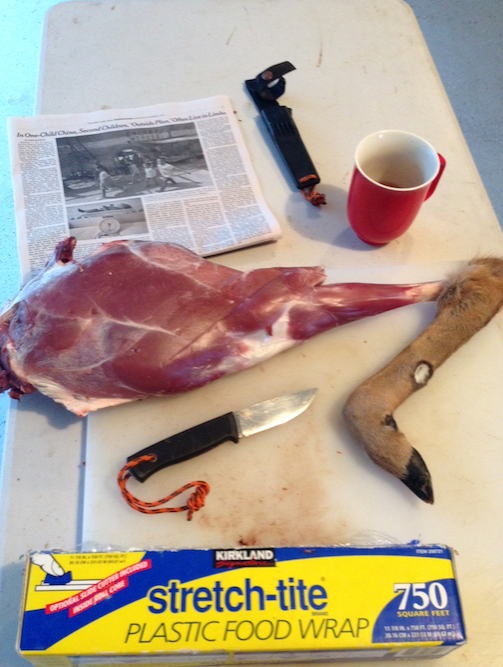 I finally got one. A whitetail deer, I mean. And, as I’m headed to Kansas, Land of the Giants, on Saturday for a five-day bow hunt, I’m hoping this will boost my confidence. This particular deer was not a Giant. (In fact the ham in the picture at left is even smaller than it looks, as the knife, newspaper, coffee cup, and box of plastic wrap shown all came from an old set of Barbie-doll accessories at a garage sale.)

I shot the deer half an hour before sundown on land owned by my friend Scott. The wind was wrong for the ladder stand I wrote about in an earlier blog. Since then, however, I’d discovered a second one. It was pretty crude, an actual aluminum ladder with a hang-on stand at the top. There were briars entwined in the rungs and more briars sprouting through the seat. It was pretty rickety. After a few seconds of careful deliberation, I decided to use it anyway, clearing the thorny vines with a pocketknife.

It didn’t feel like a great setup. The stand was set into the woods but nonetheless exposed. The adjacent overgrown field has four-wheeler paths cut into it, and the stand was at the end of a perfectly straight one 100 yards long that came to a crossing about 30 yards in front of me. There was also a strip 20 yards to my left.

Eventually, two does and two fawns began feeding my way down the 100-yard strip. At 80 yards, the does stopped and stared at me. I hadn’t moved but they seemed highly aware that what had always been an empty seat now had a dark blob in it. I shut my eyes and didn’t move for 10 minutes.

When I opened them, the does had resumed feeding. Then they got spooked by something to their right and skedaddled. The two fawns kept approaching. I was expecting them to go left—in the direction of the nearest corn—when they got to me. I was worried about this because my shooting has gone to hell recently, and I didn’t feel comfortable taking what was a 32-yard shot. To my surprise they turned right and then immediately left, which brought them to the path 20 yards away. The first of the two was bigger and the one I wanted, but it passed by at a brisk walk. The second was moving more slowly. When it got into the open, I grunted at it and shot. It bounded down and away. I knew I’d hit it but wasn’t sure how well.

I found my bloody arrow immediately. It had passed right through and into the ground. There were a few light-colored hairs on it. Other than a small piece of red tissue next to the arrow, there was no blood trail. I spent the next half hour looking for one. Nothing. As darkness came, I searched by headlamp. Nothing. As full-on dark came, I’d nearly resolved to flag the spot where I’d found my arrow and resume the search by daylight. I knew the general direction the deer had gone, so I headed that way for one last sweep. Forty or fifty yards from where I’d shot it, I found the dead fawn.

A wave of relief washed over me. The field-dressed animal couldn’t have weighed much more than 40 pounds. The wounds showed that the deer had been quartering away more sharply than I’d thought. My arrow had entered behind the ribs on the left side and went through the right front shoulder. I might not have gotten both lungs. If so, I’d only nicked the left one. I might have gotten the heart. I realized that a larger deer—like a Kansas buck—might have gone a lot farther before dying. But I’d killed a deer.

As far as a confidence booster, I see this as kind of a wash. I’d killed a deer but hadn’t made a great shot. Maybe I’ll limit my shots in Kansas to 20 yards on deer that are perfectly broadside. This is humbling. I used to be able to shoot 35 yards pretty confidently. This year I’m coping with both mild target panic and rotator-cuff issues. I’m trying to stay positive, focusing on what’s there rather than what isn’t. I cling to that line from Tennyson, “Tho’ much is taken, much abides.”