Slow Down and Smell the Yellow Perch

Illustration by Jack Unruh While camping at Pennsylvania’s Lake Marburg this summer, I convinced four kids—three of them mine—to go... 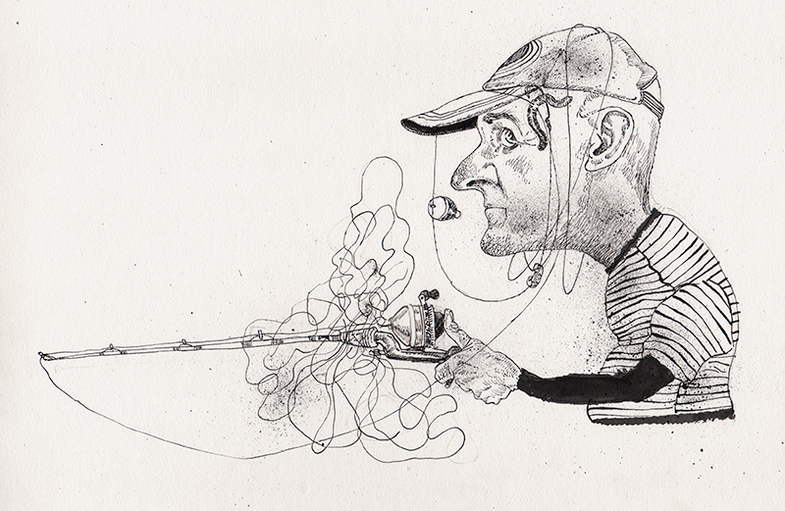 While camping at Pennsylvania’s Lake Marburg this summer, I convinced four kids—three of them mine—to go fishing. A direct approach (Hey, who wants to go fishing?) draws yawns from these kids. So I snuck up on them.

Officially, we’d gone to the “beach” to try out the new sit-on-top kayak I’d bought in hopes of dragging them away from their screens. But I’d also packed some fishing rods. I knew better than to have an agenda. They might boat, swim, fish, or sulk. There was no way to know.

I wasn’t feeling that hopeful about their using the kayak because when I’d first shown the bright orange boat to Jack, he’d shrugged and said, “How come you only got one?” I didn’t say what I was thinking, which, come to think of it, I can’t say here, either.

Emma went out in it immediately, however, and then stopped 200 yards out. After a while I yelled for her to come back and give somebody else a turn. “I can’t,” she called. “I’ve got, like, eight dragonflies on my paddle. I don’t want to drown them.” This was a minefield I chose to ignore.

By a stroke of luck, I suddenly came into possession of a tub of worms and rigged one on a tiny hook with two split shot. Cousin Nancy was new to the game, so I explained how the push-button reel worked and how to cast. Before I could ready the next rod, she was screaming, “Oh my God! It’s a fish! Oh my God! What do I do?” I told her to turn the handle as I waded in after her zigzagging line. It was a little yellow perch, and she was ecstatic.

Long story short, I didn’t stop unhooking fish, untangling lines, baiting hooks, instructing how they could bait their own hooks because it was time they learned, and retrieving worms from trees for the next 90 minutes. Emma finally returned. The dragonflies had left. Each of the four kids caught fish, all yellow perch and bluegills, except for the evening’s trophy—a 9-inch “widemouth bass.”

At one point, I slipped and fell backwards onto the grass, which was well-fertilized with goose crap, but I didn’t have time to do anything about it. We kept at it until it was too dark to see. By the time we left, the kids were all wet and exhilarated. Michelle drove them back in the van. I told her I wanted to walk to the campsite. I needed the quiet. I took off my shirt and rinsed it in the lake. I was exhausted.

An hour later, as Michelle and I lay in our half of the Coleman tent, on an air mattress with a slow leak, she said, “You were awesome out there, babe.”

“Yeah. I knew the kids were driving you crazy, but you didn’t let that stop you. You just kept tying knots and getting their lines back in the water and helping them fish. You were amazing.” She kissed me and fell asleep almost instantly.

I lay there, exhausted, extremely stiff in the back, but realized that I was happy. Sometimes I get so caught up in the hectic nature of parenting that I forget to enjoy it. But this had been a good day. I was happy.

But there was one final task I needed to set my mind to: Falling asleep before the air mattress went flat. I can’t remember if I did or not.