We interrupt your regularly scheduled blog to bring you a public-service announcement from my butt. I am temporarily indisposed insofar... 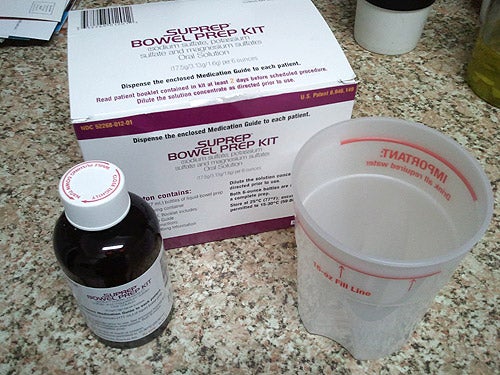 We interrupt your regularly scheduled blog to bring you a public-service announcement from my butt.

I am temporarily indisposed insofar as I’m having a colonoscopy tomorrow at 12:30 p.m. In preparation for which I recently consumed the first of two doses of SUPREP. Which is “an osmotic laxative indicated for cleansing of the colon as a preparation for colonoscopy in adults.” That is one heck of an understatement.

You may be a big believer in your favorite gun cleaning solvent—Hoppe’s, Break-Free, Gun Scrubber, etc. I’m here to tell you that I’ve yet to use one that works on a gun bore the way SUPREP does on the human gastrointestinal tract. The taste is appalling, like burnt, salty, black cherry stuff that was left on the stove for days. But, man, does it work. It kicked in 15 minutes after I drank it and is only now—2½ hours later—just thinking of letting up. I doubt there’s a gram of solid matter left in me. And I take a second dose tomorrow morning before “the procedure.”

I found a website with reviews of the stuff. Everyone agrees that the taste is horrible. But that part is over pretty quick. It’s the next 2 to 3 hours that bothered me. I haven’t spent so much time in a bathroom since the last time I painted one.

One reviewer on the site put things in perspective. “Think about it,” wrote GirlGo on May 5 of this year. “This is nothing to deal with in comparison to the cancer treatment you might have to have…..the benefits definitely outweigh the negatives!”

That’s too many for these treatable diseases. You don’t want to be that guy. You don’t want your buddies to be that guy. Get the procedure and urge your pals to do the same. A healthy male over 50 should get a colonoscopy every 10 years or a flexible sigmoidoscopy every 5. I’ve been to this rodeo before and can assure you the prep is waaay worse than the procedure itself.

I’m getting mine done now, way ahead of hunting season. I urge you to find out when you last had one or whether it’s time to start. I’d like to keep you guys around.