The Confusion About Lyme Disease, Part 3

A bull’s-eye rash: One of the many symptoms of Lyme disease. I am not a medical professional. I do feel... 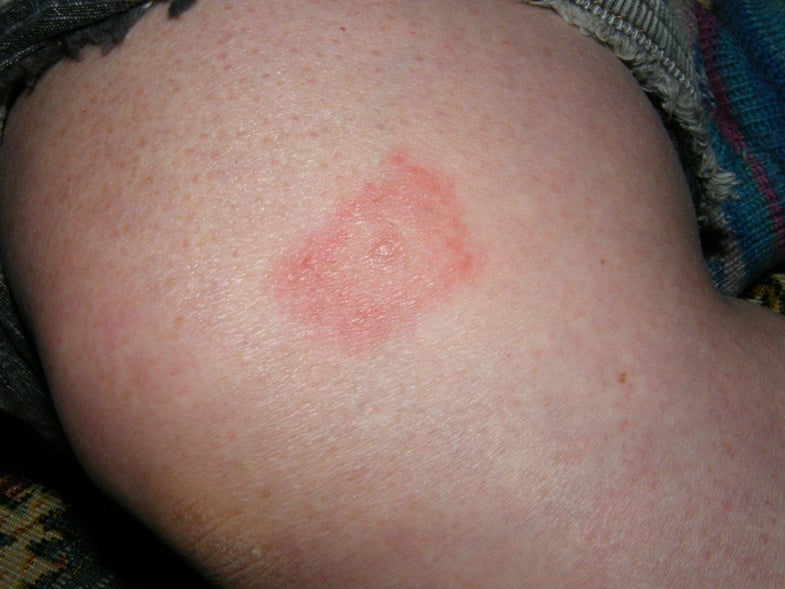 A bull’s-eye rash: One of the many symptoms of Lyme disease.

I am not a medical professional. I do feel qualified to confuse the hell out of you about Lyme disease (see previous posts here and here). The medical community itself is confused as hell about it. They can’t even agree how to diagnose it, much less cure it. Or whether it can be cured in all cases.

The most reliable indicator of the disease is the bull’s-eye rash. That’s the gold standard. Pretty much every specialist agrees that it indicates Lyme. But there are still doctors who won’t confirm the diagnosis unless a patient with the rash also tests positive for Borrelia burgorferi bacteria.

This crazy for several reasons. We don’t know how to test for the bacteria itself. So we test for the presence of antibodies, the immune system’s response to infection. But antibodies may not show up for six weeks. During which time the disease is spreading. Further, the tests for the antibodies are notoriously unreliable, yielding high numbers of false positives and false negatives.

There is no universally accepted method for diagnosis of the disease. An increasing number of doctors say tests alone are not enough, that other factors and symptoms should be taken into account. For a staggering (like 60 or so) list of Lyme symptoms see lymeresearchalliance.org/signs-symptom-list.html.

Many doctors still think that a short (up to 21 days) course of oral antibiotics cures early-stage Lyme. For more advanced cases, another 14 to 21 days of intravenous antibiotics does the trick. Anything after that—even if you still have the same symptoms—is regarded as “post-treatment Lyme syndrome,” and a doctor may refuse to continue antibiotics. Instead, he or she will pass you on to other specialists: neurologists, endocrinologists, maybe a shrink. (Michelle was on antibiotics for an entire year. It helped. It didn’t cure.)

The above reflects the conflicting views of two professional medical organizations, the Infectious Diseases Society of America (IDSA), and the International Lyme and Associated Diseases Society (ILADS). The IDSA says after a short course of antibiotics, you’re cured. ILADS believes the bacteria can persist even after antibiotic treatment. One reason is the bacteria’s ability to shield itself from medications with “biofilm.” It does this by attaching to surfaces and forming a protective matrix. By doing so, it becomes “highly resistant to antibiotics, biocides, disinfectants, high temperatures and host immune responses,” according to the Wall Street Journal. Biofilm is apparently related to pond scum, whatever that means.

Long story short, there are more questions than answers about Lyme. Your doctor’s opinion as to whether you have it or not may not be accurate. Educate yourself. Get additional opinions. Be skeptical.