The Fun in Forgetting

I sometimes think that if I didn’t forget or lose so much of my stuff, I’d never have any fun... 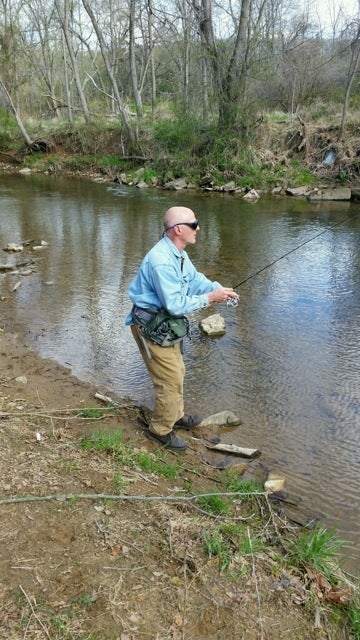 I sometimes think that if I didn’t forget or lose so much of my stuff, I’d never have any fun at all. Last night, for example, my buddy Patrick “Fidge” O’Neill texted me, asking if I still wanted to catch a trout out of the Gunpowder on a fly rod. This is something I have attempted several times, and the fish thought it was hilarious. I’d cast into the trees and the trout would come up and make little splashes at the surface, like trout laughter.

His brother had followed the stocking truck and knew a pool loaded with fresh fish that anglers were walking past because it was too small, too shallow, and otherwise inappropriate. But these were hatchery fish. They hadn’t gotten the memo. “Sure!” I texted back. Fidge had to put his two daughters on the bus, but told me to be at his house at 8:15 the next morning.

Fidge is not only a skilled angler. He is also ruthless. Just-released trout are not God’s brightest creatures, so this wouldn’t be the most challenging angling. I had a rare moment in which I found myself examining my conscience. But I’m happy to report that it passed quickly. These weren’t the same trout that had laughed at me, but they were the same species. And I was excited at the prospect of catching a Gunpowder trout on a fly rod. Not so much for my own sake. It was more so I could tell other people about it. This is never a good reason to do something.

The next morning, I tried to keep up with Fidge as he tore over back roads he has probably been driving for 30 years. When we got to the stream, I realized I’d left my wading boots in the driveway, right next to the driver’s door, so I wouldn’t forget them.

“Damn, Bill. You’d forget your own head if it weren’t for your neck,” Fidge said. “You’re not gonna be able to fly fish if you can’t wade here.”

Not to worry, I told him. I was prepared. In addition to my fly rods, I had the trout-specific spinning rod I’d recently ordered—a 4 ½-foot ultralight St. Croix carrying a tiny Shimano spooled with 6-pound—in the car. I rigged it up and shook it. It felt capable, like a well-balanced fencing foil, just the thing for close-quarters fishing.

I showed him my spinning rod. It was the same one he carries. He grunted, a gesture of recognition and respect. “Well,” he said, shaking his head, “I guess you do pay attention sometimes.” From Fidge, this counts as a high compliment.

Long story short, the fish were still in that same pool. It was maybe 2 feet at its deepest and about the size and shape of a grand-piano lid. There were 20 trout in there. And it was a pool that I would have walked by, just like every other angler.

We slew them. They hit everything we threw: Berkley trout worms, spoons, spinners, and twister tails. With that little rod, I was casting within 2 or 3 inches of every target I picked. I guess I will always be a spinning man. My casting with a fly rod is atrocious. I can usually keep it within the same body of water with a baitcaster, but that’s about it. I caught five or six fish and kept two. Fidge landed at least twice that number before he said he had to get to work.

I was ready to go. We’d bothered the fish more than enough, and I had dinner on a stringer. “Dude, I’m glad I couldn’t flyfish,” I confessed. “Even if I could’ve hit that pool, I’d have snagged on my first backcast.”

A few seconds later, he asked, “How well do you roll cast?”

I was completely happy at that moment. I’d been putting casts exactly where I wanted, had caught fish, and was toting home my dinner.

And if I hadn’t forgotten my wading boots, it never would have happened.