If you are a divorced dad trying to entice your 15-year-old daughter into getting off the Internet long enough to... 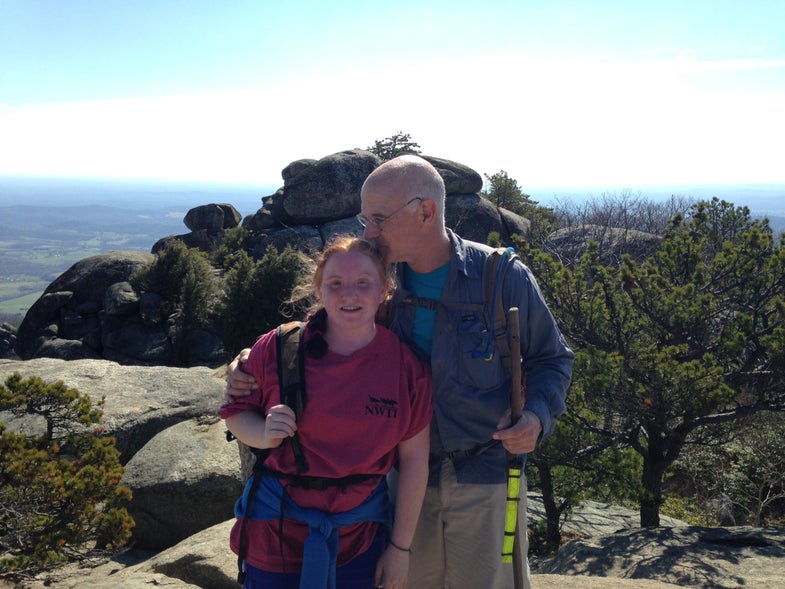 If you are a divorced dad trying to entice your 15-year-old daughter into getting off the Internet long enough to climb Old Rag Mountain, a 9.7-mile circuit hike in the Shenandoahs, you have to be, well, devious is not the word I’m looking for. On the other hand, it’s the only word that fits. Especially if the hike is rated “very strenuous” by the National Park Service. But I wanted the two of us to do something together other than go to the movies. I wanted Emma to do something that was hard and maybe find that she enjoyed it.

So I played up the fact that that she would have her “own personal Camelbak.” That we would be packing “especially good” trail snacks, including Starbucks Frappuccinos—her favorite drink on earth. We’d also have trail mix, sesame sticks, and candy. We’d also have fruit, but only for emergencies. She said we’d need to buy this special shampoo she needed to preserve the purple streaks she’d recently had installed in her hair. Of course, I replied.

I didn’t tell her that we’d be staying in the cheapest hotel in Culpeper, Va. The motel turned out to be a mixed blessing. The bad news was that the hot-water heater didn’t really work. The good news was that the Wi-Fi didn’t either.

Old Rag is a 3,261-foot peak popular for its spectacular views from the summit. We left the motel at 7 a.m., following the directions on my phone. Then we went out of cell range and got lost. Fortunately, we came across a turkey hunter—with a nice gobbler in the back of the truck—who set us straight. By 7:50 we were walking up the mountain. It got steep quick. Everyone was passing us, including families with small children. “It’s okay,” I told Emma. “It’s not a race.” About two-thirds of the way up, there is a rock scramble, where you’re on all fours as you scale boulders, drop down through 10- and 12-foot crevices, and crawl through narrow caves. “I’m never doing this again,” Emma announced after one tricky passage. Two minutes later, after another, she said, “That was awesome.” Such is the mind of a 15-year-old girl.

We pushed on. At the top it was windy and felt cold despite being in the 60s. We found a sunny seat in the lee of a boulder and ate. Emma took pictures of everything—rocks, vistas, people, ants—with her phone. There were lots of folks up there, and I got somebody to snap a few of Emma and me together.

The summit came in the first third of the hike. There were still 6 miles to go. Emma said that she’d hurt her knee recently and that it was bothering her. “Gee, sweetie, I’m sorry,” I said. “But we either turn around or keep going.” She said there was no way she was going through the rock scramble backwards. Which made sense to me. I wasn’t sure I could have done it, either.

Long story short, it took four hours to cover the remaining 6 miles, a good part of which was easy walking on a fire road. Several times, complaining about her knee, Emma repeated her “never again” vow. I tried to take her mind off her knee by asking her about the plots of the various dystopian books she’s reading, like the Hunger Games and Divergent series. For once, I was glad these things had intricate story lines. If anybody wants to write a truly radical book for young adults, they should set it in a happy, functional future.

At about 2:15, six and a half hours after we’d left, we saw the parking lot ahead. “Yea!” Emma shouted. I told her I had a surprise waiting, two cans of ice-cold grapefruit soda. We sat in the car with the doors open, drinking our sodas. We were both tired. I hadn’t walked 9 miles—let alone up 2,300 feet and down again—in a good while.

“Did you enjoy that?” I asked hesitantly, half afraid of her answer.

“Yeah, it was awesome,” she said. I looked over. She was smiling, as if both satisfied and surprised. As if she’d just done something she wouldn’t have thought she could.