The King of Tadpoles 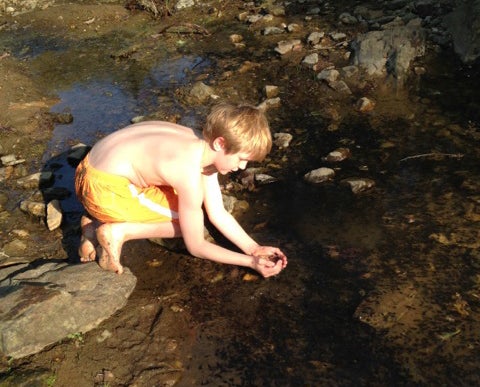 Cole, who is 8, is not having an easy time of it in school. He won’t sit still. He refuses to color within the lines. He’s easily distracted, defies authority, and doesn’t see the point of much of what he is asked to do in school. He’s also strong-willed, has a near-genius IQ, and is something of a prodigy when it comes to pushing teachers’ buttons. He knows the inside of the principal’s office better than any kid in his grade.

But put him out on the water or in the woods and he can amuse himself for hours. He wandered down to the river behind our house yesterday and Michelle asked me to check on him while she was making dinner. I found him sitting at the edge of a side pond, his feet in the water. “Mr. Bill!” he crowed. “Come see this! I got tadpoles nibbling my feet.” I went over to a pond created by the spring floods, now landlocked. It’s a good-size bit of water, no more than 2 feet deep and maybe 70 yards long and 15 yards across. I could see thousands upon thousands of little black tadpoles. Hundreds were moseying around Cole’s feet. He sat motionless, not wanting to alarm them. He’d come down with a diving mask, Crocs, and a T-shirt, each of which he’d dropped at the moment he decided he no longer needed it, at intervals of 20 yards along the river bottom.

He beamed at me, the King of Tadpoles, perfectly in his element. We stayed down there for about an hour. He herded schools of tadpoles this way and that. He stalked and caught the only adult frog we saw, a leopard frog that he released and caught again about six times. He wandered over to the main river to check it out, came back, then did it again. I asked what he was looking for. “I don’t know,” he said and shrugged happily. “I just felt like doing that.” He made a pile of the more interesting rocks he picked up. He stepped on a thorn and yelped. “What’s that doing here?” he said, as if he’d been betrayed. I told him there were all kinds of sharp things down here, including the odd bit of glass, and that it might be a good idea to put his shoes back on. “Nah,” he said. “I’m fine.”

I experienced a moment of the frustration his teachers encounter each day. Then I let it go. If he cut his foot, that might teach him something. If he didn’t, then he’d be fine. The important thing was that he was having something that seemed to have been banished from school: fun. He was in a place where all his senses were engaged, where everything he saw interested him, where nobody was telling him what to do. It was better than laser tag and nearly as good as the rides at Hershey Park. After a while I got bored. Cole, on the other hand, was still fully engrossed. I knew better than to nudge him. I texted Michelle and asked if she wanted to come down and spell me. “I’m on my way,” she texted back. “What’s he up to?”

“The King of Tadpoles has taken a seat by the water’s edge and is communing with his subjects,” I texted back. I called out to Cole that I was leaving but that his om would be down in a minute. He flapped one arm in acknowledgement. The last I saw, he had just wiggled his toes and was smiling at the movement it created among the throng of tadpoles.

After he’d gone to bed, Michelle and I were talking about the contrast was between school-Cole and river-Cole. “I think our job is to find a way to get him through school without having his spirit crushed,” I said. “The King of Tadpoles is not made to sit at a desk and do spreadsheets. But once he decides what he wants to do in life, he’ll go after it big time. I just pity anybody who tries to stand in his way.” Michelle nodded.

“That’s my boy,” she murmured as she fell asleep.