Should a boat like this idle up to me the next time I’m out, I figure I’ll do one of... 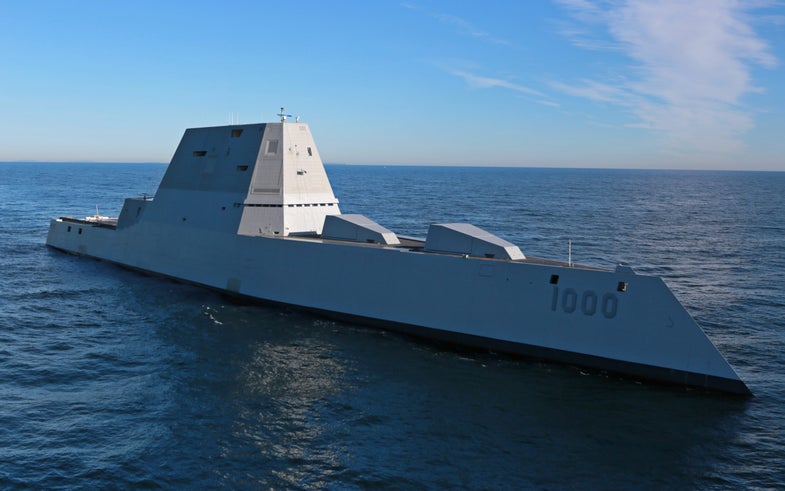 Should a boat like this idle up to me the next time I’m out, I figure I’ll do one of two things: sit there in my canoe in awe or hoist anchor and slowly paddle away. What you’re looking at is the first in the U.S. Navy’s new Zumwalt-class of guided missile destroyers. It just headed out into the ocean on December 7 to start sea trials. And it’s captain is named—aptly enough—James Kirk. (Except it’s James A. Kirk rather than Star Trek‘s James T. Kirk.)

To me, the destroyer looks supremely menacing, mostly because there is nothing overtly menacing about it in the way of things generally associated with warships. No gun barrels, no radar masts, no torpedo tubes, no antennae, no sailors’ underwear strung out to dry. You could almost convince yourself that it’s some kind of weird container ship. Or maybe one of the Civil War ironclads—the Monitor or Merrimac—returned from the future.

What’s cool about this boat?

• An inverted bow that cuts through waves rather than riding over them.

• A tumblehome hull, in which the sides narrow in above the waterline. This deflects projectiles—think Panzer tank armament—and enemy radar. In fact, when you combine this with the vessel’s other stealth technologies, what you end up with is one hell of a big ship, 600 feet long, with the radar signature of a small fishing boat.

• The power plant, including a couple of 35.4 megawatt Rolls-Royce MT30 gas turbines, Curtis-Wright electric generators, Rolls-Royce turbine generators, and two big propellers. I don’t pretend to know what all that means. I do know the thing moves in excess of 35 mph.

• Firepower. Try 80 launch cells for advanced Tomahawk missiles (one per cell) and, for air defense, Evolved Sea Sparrow Missiles (4 per cell). Also Anti-Submarine Rockets. I believe it will also carry up to 1 million bottle rockets for Fourth of July entertainment purposes.

• Oh, and, you know, the normal ballistic stuff: two Long Range Land Attack Projectile (LRLAP) 155 mm gun systems, capable of firing guided and unguided munitions, and accurate to 50 miles or so. A 155 mm is a 6.1-inch gun, so it’s too big for varmints. It can fire 225-pound projectiles with 24-pound bursting charges 10 times a minute. It’s accurate to within 50 meters on targets 68 miles away. For close work, the Zumwalt carries two 30 mm chain guns.

Military ship buffs will no doubt point out all kinds of errors in the above information, which I’ve passed on to the best of an English major’s ability. But they can’t dispute my larger point, which is that although the U.S. no longer dominates when it comes to the manufacture of the world’s best cars, television sets, or toasters, we still makes some formidable warships. And if I had to pick one of the categories just mentioned as a priority, warships would be my choice.

Now if it just had a bow-mounted trolling motor.

Photo courtesy of the U.S. Navy