The Night the Room Exploded

I’m afraid of people who aren’t afraid of guns. If you so much as pass the muzzle of an unloaded... 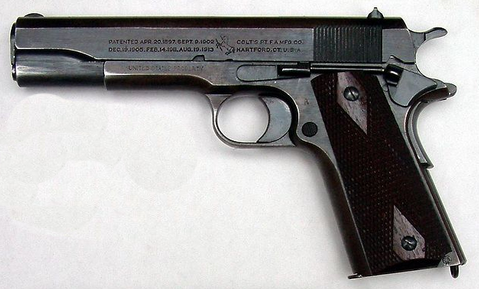 I’m afraid of people who aren’t afraid of guns. If you so much as pass the muzzle of an unloaded gun over me, I’m either going to tell you never to do that again or I’m going to get in my car and drive off.

I consider myself lucky to have experienced an accidental discharge early on. I was 21 years old and housesitting for a friend’s family for a week. The only guns I’d ever fired were single-shot .22s at Camp Wachusett in New Hampshire, where I won Junior Riflery back in 1965 or so. One night at the house, I opened the cabinet next to the bed and found a leather shoulder harness containing a U.S. Government 1911. I pulled the gun out and held it. I knew nothing of semi-auto pistols, but I’d watched a lot of TV. I knew that if you pulled the slide back, something happened. I did this and watched a live round somersault into the air. So far, so good. Next I found the magazine release button, and the magazine dropped into my hand.

Having seen the somersaulting bullet and removed the magazine, I was positive that the pistol was unloaded. I played with it for some minutes, aiming it at various objects and posing in front of the mirror like a tough guy. Holding that gun gave me an incredibly heady sense of power. For all I know, I may have pointed it at my head. Eventually, my finger touched the trigger—and the room exploded. I saw the shocked face of someone who looked a lot like me staring back from a full-length mirror. For the next five seconds, I went into a dissociative state, a mild form of shock. I honestly didn’t know whether I’d shot myself or not.

The bullet landed in a stud in the wall. I was able to patch it with spackling putty. I found extra rounds in the medicine cabinet. A friend who knew about guns came over, reloaded the magazine, and put it back in the gun. “I’m not going to chamber a round for the guy. He was an idiot to leave it around unsecured, and a bigger idiot to leave it with one in the chamber.”

The couple returned from their trip and never knew what had happened. I was lucky. I might just as easily have injured or killed myself. The experience has given me a low tolerance for people who are complacent around firearms. I wish every beginning shooter could have a scary but non-injurious accidental discharge like mine. You can talk gun safety all day long and never have it hit home. When the room explodes, the hypothetical becomes as real as it gets, and it changes you for good.