We had a sad little crabapple tree—that’s what Michelle said it was—that was on its last legs behind the house.... 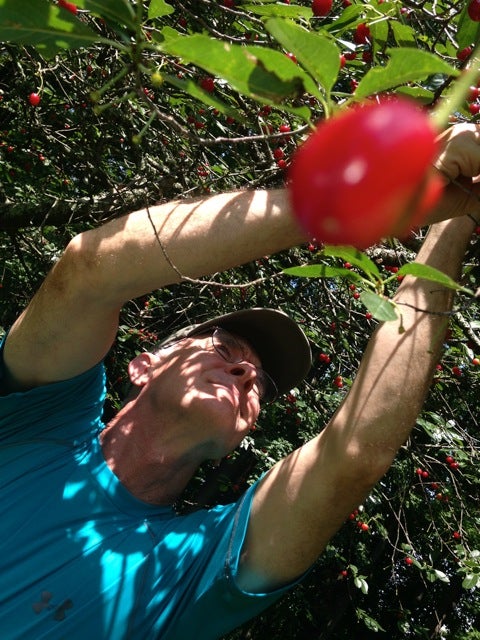 We had a sad little crabapple tree—that’s what Michelle said it was—that was on its last legs behind the house. It was about 12 feet tall, stunted, stitched with holes from some parasitic insect or bacteria, with a lot of black fuzz on many limbs that didn’t look healthy. One day last fall I took pity on it and spent half an hour pruning. I did a radical job—I cut it waaay back.

It worked. The tree greened up nicely this spring. Then, just a couple of weeks ago, I noticed that it was covered with…sour cherries! This was like hitting the forager’s jackpot. It had been so far gone that Michelle had misidentified it.

Sour cherries are almost impossible to find in stores, except as jam or in cans. This is because they’re difficult to grow and the fruit is too fragile for modern shipping methods. A lot of people count themselves lucky to find them at a local farmer’s market for a few weeks each spring. I like supermarket Bing and Rainiers. But sour cherries have a special place in my heart. They make fantastic pies. I had courted Michelle by baking her a sour cherry pie (with a lot of help from my mother). She was so impressed by that pie that she let down her guard. And now she’s stuck with me.

We both stopped what we were doing, got a step ladder and our blickeys—any basket you tie around your waist, allowing you to pick with both hands—and picked that tree clean. We worked for two hours without stopping. We ended up with 9 pounds of sour cherries. Most are pitted and frozen. But we put enough aside to make a pie.

If you happen to have a sour cherry of your own or know where one is, now’s the time. Same with serviceberries and mulberries. It won’t be long before it’s time for wineberries and raspberries. Wild fruit moves to rhythms just like wild game and fish does. And, like the rut or the bass pre-spawn, once it’s over its over.