Maybe next time. You have to have a certain grudging respect for the the human instinct to throw hooks in... 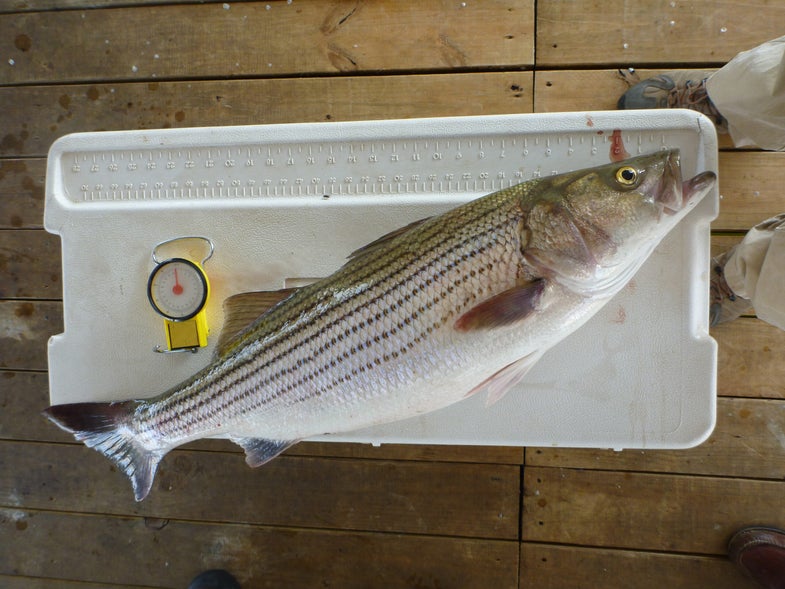 You have to have a certain grudging respect for the the human instinct to throw hooks in the water without any regard for whether conditions make catching fish likely. Last week, on a 9-hour, $100 trip with six other anglers fishing the Chesapeake for striped bass, we caught a ray, a small catfish, and a couple of tiny perch. With five lines in the water, we averaged less than one undersized fish per hour. I, incidentally, didn’t catch any of these.

I was on a 47-foot boat with my pal, Patrick “Fidge” O’Neill, his two brothers, and two other guys. The surface temperature of the water was 81 degrees. There were no birds working anywhere. Cormorants were packed wing-to-wing on every buoy and platform. They obviously weren’t expecting a banner day. Of the guys said his father had asked him the night before why he was headed out, because there weren’t any stripers in the Bay right now. I don’t know if that was true. I do know there weren’t any stripers that had the least interest in attacking the surgical hoses we were trolling or the many shades of bucktails or the formerly live eels we were bouncing off the bottom. It took 5 ounces of lead to get bait to the bottom, which is a lot to be jigging hour after hour.

But we weren’t the only fools out there. All over the bay, boats of varying sizes bristling with fishing rods were lazily zigzagging over the water. Rarely did we see any of them stop as if they’d located fish. On the other hand, a head boat that stopped and anchored was almost instantly surrounded by other boats.

The air temperature was about 90 but fairly dry, a balmy day by local standards. Still, the amount of electromagnetic radiation directed into an open boat on water is substantial. I’d gotten up at 3:45 in the morning, and by 1 o’clock I was ready for a nap. There was a couch inside the air-conditioned cabin, but somebody had beat me to it. No matter. I lay down on the floor in such a way as to not block access to the fridge or head and conked out.

We nuked hot dogs for lunch and drank beer, lemondade, beer mixed with lemonade, and lemonade mixed with beer. Some of us also had water. At 3 o’clock we decided to pack it in. Fidge had to get to his in-laws’ 50th anniversary party. Everybody had to be someplace.

Back at the dock, we shook hands, thanked the captain, and said we hoped to do it again soon. And the weird thing is, we meant it.