Thinking Outside the Box

We are moving, which means packing up all our stuff, which means we have the glazed-over look of people who... 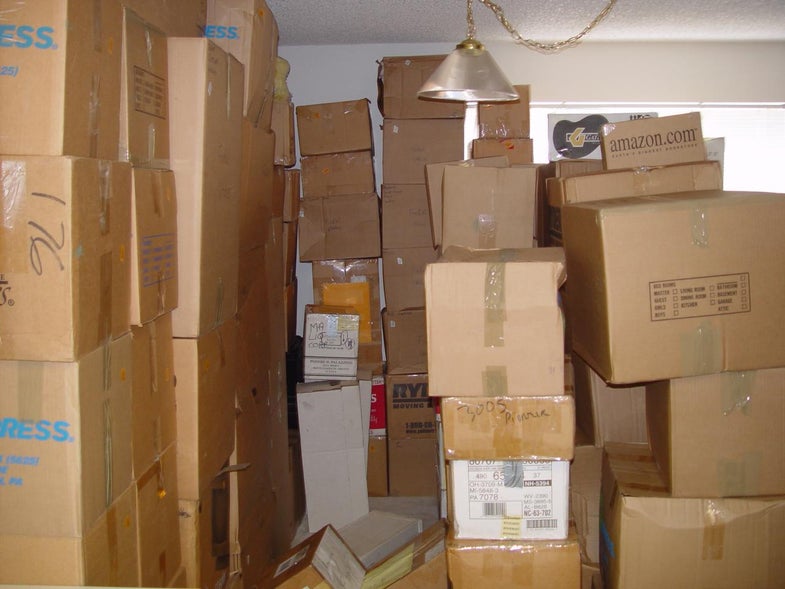 We are moving, which means packing up all our stuff, which means we have the glazed-over look of people who just walked away from a plane crash and now want to know where our luggage is. As if that will make everything okay again. We bought 100 boxes at Lowe’s, another 50 from a guy on the neighborhood listserv, two tape guns, and 6 miles of packing tape. This is about as far as I’ve gotten because I’m overwhelmed to the point of paralysis by the sheer amount of crap I own. I routinely find myself with a Sharpie in my mouth, a tape gun in my hand, and no idea why I just came into a particular room. If this were somebody else’s stuff, it wouldn’t be a problem. I’d just pack it up. But it’s not. It’s my stuff.

Today, Michelle has assigned me the tasks of packing up my office and one of my gear closets. Fortunately, I keep the latter carefully organized. Whenever I need to store a piece of gear, I open the door, fling it inside, and slam the door shut before everything else topples out. So packing this should be a snap.

Somewhere in there, I have two pairs of insulated bootfoot waders (one thinner, one thicker) and a pair of hip waders, even though I haven’t been duck hunting in years. The minute I get rid of them, I’ll be invited to go duck hunting. I also have four pairs of binoculars, weighing from less than a pound to a little over 2 ½ pounds. The minute I get rid of even one pair, I’m sure a phone call will come and a voice on the other end will plead, “You’re the last hope I’ve got. I need four pairs of binoculars right now.” I have more fishing rods than I can count, many of them in need of repair, many bought for children who never use them. And a considerably lesser number of reels, both spinning and baitcasting.

And I will get to it. But first, I’m going to spend a half an hour—okay, maybe an hour—trying to learn how to pitch a jig with a baitcaster off the back porch. This is a skill I’ve always envied but never been able to master. Actually, I’ve never been able to do it without creating bird’s nests of astounding complexity. It seems inexplicably important that I practice this today.

In my office, I keep coming across mementoes of my Dad, who died in 2007. He had the world’s ugliest muskrat hat, with earflaps. People joke about hats that look like roadkill. This one isn’t joking. His parents sent it to him when he was standing watch on the bridge of a ship in the North Atlantic in 1942. He was 22, just out of the Naval Academy, the artillery officer aboard a destroyer guarding convoys of merchant ships being torpedoed by German U-boats. He once told me their orders forbade them from stopping to pick up survivors. I keep the hat in a box. I never wear it but can’t part with it. I have his three-fingered shooting mitts from that era, which, when I saw them as a boy were the first I’d ever seen and seemed like something invented for a manatee. He loved to sail, and I have his sailor’s knife. It has just three blades: a marlin spike that would puncture a car door, a sheepsfoot blade, and a strange, forked blade that he said was for when you needed to rip a sail in a hurry. My father tried to get me interested in sailing when I was 13. We were already locked in Oedipal battle by then. If he’d been just a little smarter, he’d have forbidden me to sail. Today, I’d give anything to be able to go back and say, “Sure, Dad. Teach me how to sail.”

I can’t, of course. I have to go practice pitching a jig. And then I have to pack boxes.