What I Did on My Summer Vacation: Butchering Chickens

I’m visiting my friend Steve Burnett in the teeming metropolis of Bovina, N.Y., population 610. He has a couple of... 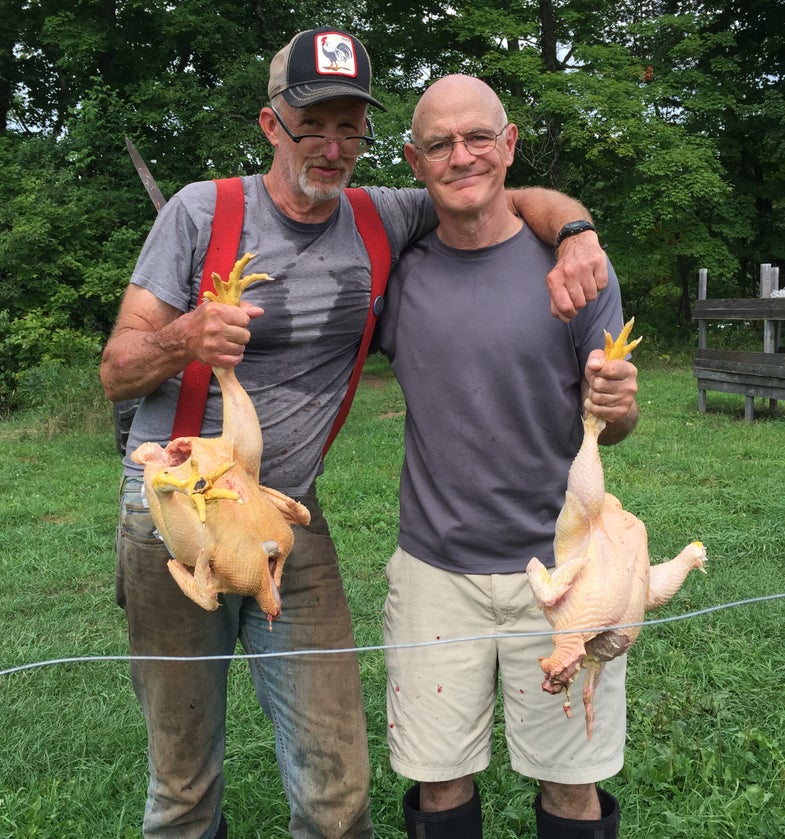 Burnett and me, and a couple of chickens. Emma Heavey
SHARE

I’m visiting my friend Steve Burnett in the teeming metropolis of Bovina, N.Y., population 610. He has a couple of ponds, lots of trails, plenty of turkeys and deer. I brought some rods, my swimming trunks, hiking boots. When I met Steve for coffee yesterday morning and asked what the plan was for the day, he said, “First we gotta kill, clean, dress, wrap, and freeze about 10 chickens. You bring rubber boots? It’s like a sewer in the coop.” I wasn’t entirely sure what I’d been expecting, but I was sure it wasn’t killing chickens.

I hadn’t brought rubber boots. Steve loaned me a pair, gave me a big fishing net, and told me to go in and catch a chicken while he started heating a big stainless steel kettle of water on a propane burner. It took a while, but I finally nabbed a chicken, which fluttered in the net but couldn’t rise up out of it. Steve was waiting by a table with a hatchet and block. He took the bird in his arms, told me to hold its head in one hand, lay the neck across the block, and whack it.

The chickens proved much more lively in the first 30 seconds after dying than they ever had in life. It’s kind of astonishing if you’ve never seen it before, as if they were objecting to what had just happened to them a bit too late. There were more revelations to come, at least to someone like me who grew up in the ‘burbs. Wrapping the feet in wire, dunking them in water to wash off some of the mud, and hanging them up to bleed (which seemed pointless, since almost no blood drained). The scalding. The rubber-fingered plucking wheel. The plucking of the feathers the wheel left behind. And then pushing whatever poop remained in the chicken’s lower regions out before doing the rest of the cleaning.

It was, like all killing, unpleasant. But I eat chicken, and I wanted to know what was involved in between the crowing bird and the McNugget, so I made Steve school me in all the details. Right down to shoving your fist up its cloaca (the technical term) and pulling out blue viscera, yellow fat, the gizzard and heart.

And, like so many unpleasant things, you quickly get used to it. After about an hour, we had become almost proud of our work. As you can see in the picture above of two old friends displaying their handiwork.