What I Know About Raccoons

I probably have less experience and knowledge of raccoons than most of you. I have heard that they’re nothing to... 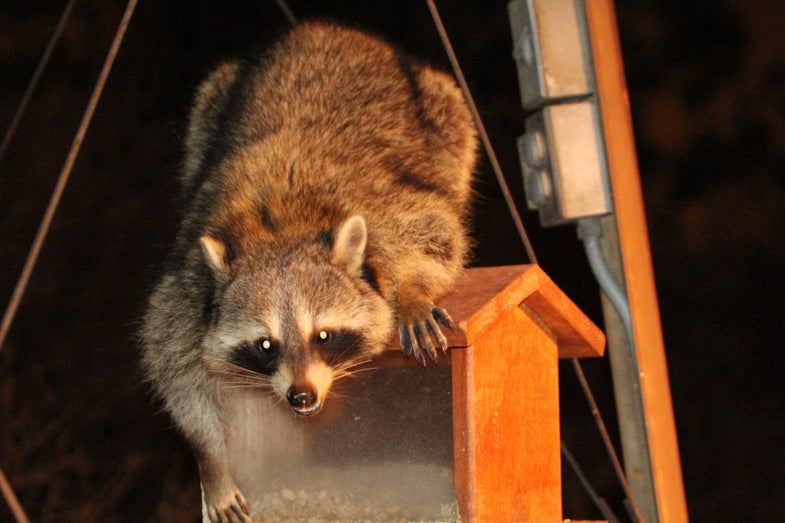 I probably have less experience and knowledge of raccoons than most of you. I have heard that they’re nothing to mess with, despite that cute black mask. I remember some years back taking out the trash one night with our dog and realizing that there was a good-size coon perched calmly in a tree just a few feet above my head. The beast was not at all intimidated by me or my dog. He was just waiting to take a crack at our garbage. Ham studiously ignored the coon. Ham knew he would lose that fight. That was all I needed to know. I ignored the coon, too.

Most humans who should be afraid of them aren’t. Below, for example, is a video of a guy who has watched too many Disney specials. “I’ve never seen this many raccoons before!” he gushes, as if he can’t believe his good luck. He’s in a city. There are five raccoons along a chain-link fence. There’s what looks like a feral cat traveling with them. When the guy announces that he’s going to feed the critters and they start approaching, the cat can be seen moving away. It’s not a stupid cat. It knows that this will end badly. It does. I don’t know if the guy lost his finger, but I’m guessing he needed a rabies shot and some serious antibiotics afterward.

At the other end of the spectrum is this unexpectedly heroic guy. When he discovers a coon attacking his dog at night, he immediately runs down a flight of stairs, grabs the coon off the dog, and then hurls it down another flight of stairs. As is so often the case with heroic deeds, he’s reacting, not thinking.

I’d like to believe that I’d do the same. But I’ve just returned from coon hunting in Tennessee with some guys who seemed to regard coons’ ability to hurt dogs and men in more or less the same way they regard a water moccasin’s. Which only increases my respect for the guy in the video.