What to Do If You See a Huge Rattler

Rattlesnakes serve an important function in the natural order. I’m not talking about how they primarily eat small mammals that... 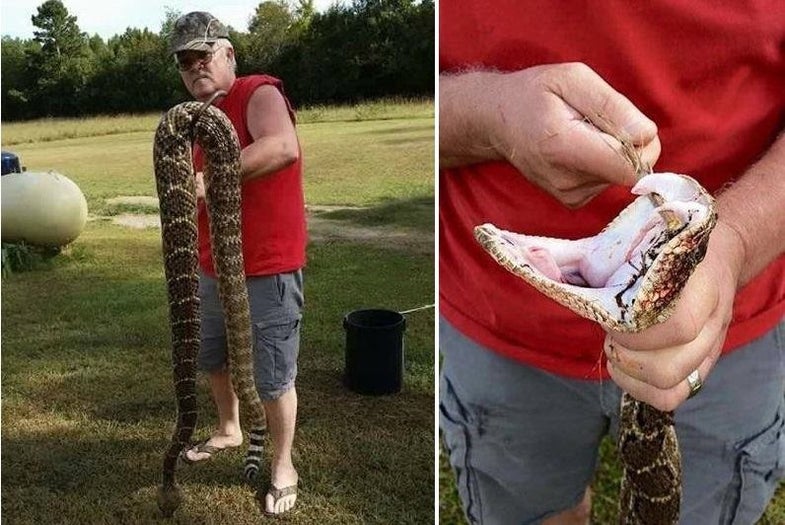 Rattlesnakes serve an important function in the natural order. I’m not talking about how they primarily eat small mammals that are often vectors for disease—prairie dogs, white-footed mice, and rats, to name a few. I’m talking about scaring people to death. Above is one that was killed in Sebastian County, Arkansas, last October. Judging from the photo, that sucker is about 19 feet long and probably contains enough venom in one bite to kill Donald Trump, Ted Cruz, and Hillary Clinton.

This is where, as a voice of reason in the outdoors, I state that while I have a healthy respect for poisonous snakes, I’m not especially afraid of them. Unfortunately, this is a lie. Rattlers, cottonmouths, copperheads, and coral snakes all scare the crap out of me. I figure that any critter that carries around that much poison in its head was probably a freelance writer in a former life, is not a “people person,” and is incapable of empathy, remorse, or sarcasm.

As in many states, in Arkansas it’s illegal to kill a snake unless it poses an “immediate danger.” The man pictured reportedly said it had bitten two of his dogs, killing one. I guess he thought that was immediate enough. There was instant Facebook speculation that this snake, presumably a western diamondback, was a potential record, 8 feet or longer.

While it’s still a monster, it’s apparently not as big as it looks in the photo. Snakes are just like bass. They look bigger if you hold them close to the camera. That’s apparently what this fellow did. But even at 6 feet, it would get my feet motoring.

If you do encounter a rattler, don’t run. Avoid eye contact, as this may antagonize the snake. Instead, back away slowly while talking in a loud, confident voice, raising your arms so that you will appear larger and less like prey.