A Turk’s knot. Sitting in the airport, I watch as the Platinum, Gold, Tungsten, and Aluminum Club members are called... 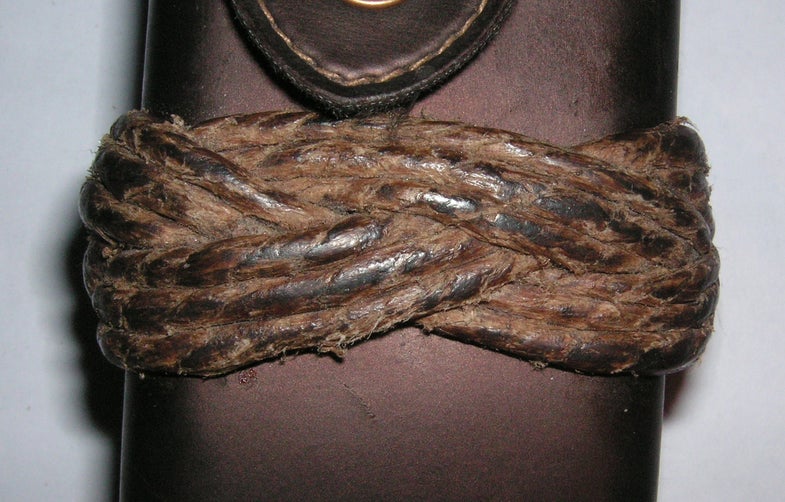 Sitting in the airport, I watch as the Platinum, Gold, Tungsten, and Aluminum Club members are called to board the plane. I keep meaning to sign up for one of those. The few other passengers waiting to be called are deep in their phones. Me, I’m fiddling with a 9-foot piece of paracord, working on a three-strand Turk’s head, a sliding knot for scarves or bracelets. Then, maybe I do a bosun’s whistle knot, a decorative knot you start by threading the string between your fingers against your palm. It’s based on a carrick bend, but then the ends come back up through the middle to give a nice lanyard knot. When doubled—by following each strand around a second time—you get an even prettier version. And don’t be misled by the word “decorative.” So-called decorative knots can be quite functional. Tie a bosun’s around the handle of your suitcase in bright cord and you can spot that sucker on the carousel from 30 yards. And if anybody who only looks at the bag itself—a lot of people don’t even notice knots—claims it’s theirs, you say, “Really? So this your bosun’s whistle knot?”

There is a deep satisfaction that comes the first time you successfully tie a new knot. And a deeper one still when you can do it without a diagram, when you own it. Sometimes it takes hundreds of repetitions before that happens. Like with the jar sling, which cinches down over the lipped edge of a jar or bottle like a hose clamp. It is, incidentally, hard to find a good demonstration of the jar sling. Wikipedia’s is no more than fair. I found a 3½-minute video here that is dreadful. They don’t even start tying the knot until you’re a minute in, by which time you’re ready to gnaw off your arm. The best description is on p. 208 of the bible of knot tyers itself, The Ashley Book of Knots. As the master notes, “The JUG SLING or JAR SLING KNOT is invaluable on picnics or wherever heavy bottles, vacuum jars, or jugs have to be lugged considerable distances. Sailors find it useful on ‘wooding’ and ‘watering’ trips ashore.”

Most recently, I knotted my way through a 5 Seconds of Summer concert to which, in an act of fatherly bravery, I took Emma last weekend. There was an audience of 24,500 screaming girls and 500 parents who hadn’t found a way to get out of going. I credit my survival to three things: earplugs, beer, and string. I had the good sense to bring my own earplugs and paracord. And I bought the beer ($16 for a 24-ounce draft initially seemed like highway robbery; 10 minutes later, it seemed like a bargain). I sat there practicing the monkey’s fist, a knot to add weight and bulk to the end of a heaving line. I was out of practice and the first two times I didn’t count the number of turns correctly so my monkey’s fist looked lumpy instead of symmetrical. About the time the band was finishing their second encore, I got it right.

And since I’d finally nailed it and there were already 24,500 girls standing and cheering, I stood up and cheered, too.