Illustration by Jack Unruh I’m a late arrival to our national preoccupation with zombies, and I’m still trying to understand... 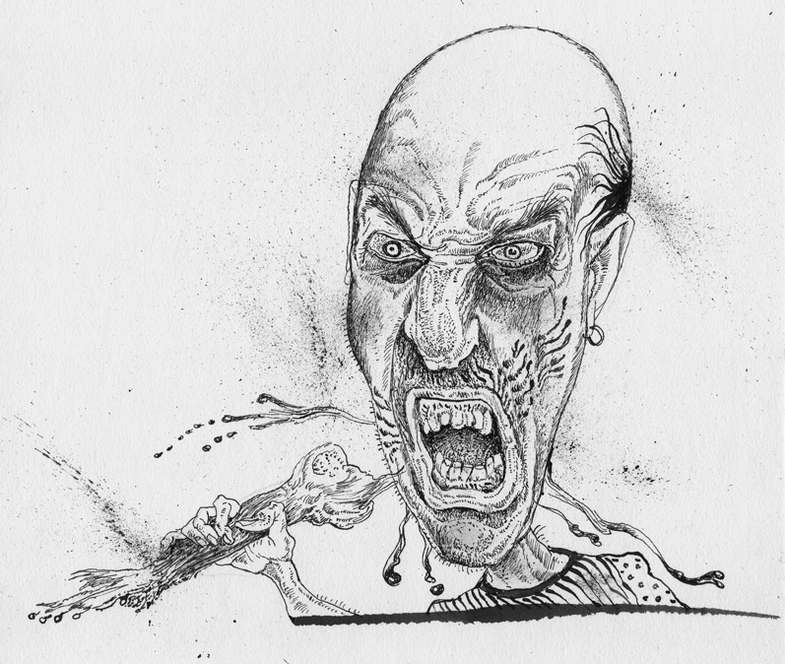 I’m a late arrival to our national preoccupation with zombies, and I’m still trying to understand the phenomenon. I’ve only watched one episode of The Walking Dead (Season 2, Episode 13), but I nevertheless feel that I have important views to contribute. Such as:

-Zombies aren’t really all that fascinating. As far as I can tell, they have a pretty limited range of emotions. By which I mean hunger.

-Zombies walk funny and would probably benefit from a program of stretching. Lunges and hamstring stretches would be best, I think. But even something as simple as swinging their arms when they walked would probably make a big difference. I’m not sure why I want to help them. I guess I’m just a nurturing person.

-If you see a zombie with its shirt tucked in, it’s not a zombie.

-The only way to kill a zombie is by destroying its brain. It’s not important to understand why. The good news is that zombies have skulls like egg shells.

-In the episode I saw, when the old farmer’s place is invaded, the guy goes Rambo, mowing walkers down with what looks like a Remington 870. But it’s obviously a special edition because he shoots it 143 times before he needs to reload. Also, the gun has no discernible recoil. When he fires, flames come out of the muzzle like he’s shooting a lighter—like one of those really big ones shaped like a shotgun.

-In subsequent scenes, the actor playing the farmer clearly wishes he were holding an umbrella instead of a shotgun. He does seem to have been told that you don’t point it at people you don’t want to shoot, but it’s like the thing is a frozen rattlesnake that may thaw at any moment and bite him.

-I want that self-cocking crossbow. The dude who totes it fires, and five seconds later—shazam!—it’s cocked and loaded again. They could at least show a cocking rope looped around his neck, stethoscope-style like in the hospital dramas. In one scene, he has a wooden arrow that appears to have no broadhead at all, just a sharpened tip. He’s in for a big surprise if he tries to shoot that thing more than 6 feet. Fortunately, that rarely happens with zombies.

-Why is the crossbow guy in the lead of two gun-toting guys as they clear a house of walkers? In real life, the other guys would say, “Bud, how about you watch the back door?”

-Everybody with a pistol is always amazed when, after only 50 or 60 shots, the thing runs out of bullets. Their initial reaction is surprise, followed by angry disappointment. They seem to be thinking one of two things: “Damn, my stupid gun is broke!” or “I could have sworn I put 250 rounds in there!” Imagine if, after the last round is fired, the person just ejected the spent magazine and slapped in a new one. That would be crazy, right? Instead, they throw the gun away in disgust.

—Here’s my biggest problem: Everybody is loaded for bear. They’ve got man-stopping combat handguns all in big calibers. They’ve got high-powered hunting rifles and all kinds of 12-gauge assault shotguns. If I was facing a field of advancing, egg-shell-skulled zombies, I’d want a Ruger 10/22 and about three bricks of .22 LR (which I assume will be more available in the post-apocalypse than now). Those zombies would never know what hit ’em.