The Florida Fish and Wildlife Conservation Commission recently announced that a 13-year-old Alabama boy has shattered the state’s flathead catfish... 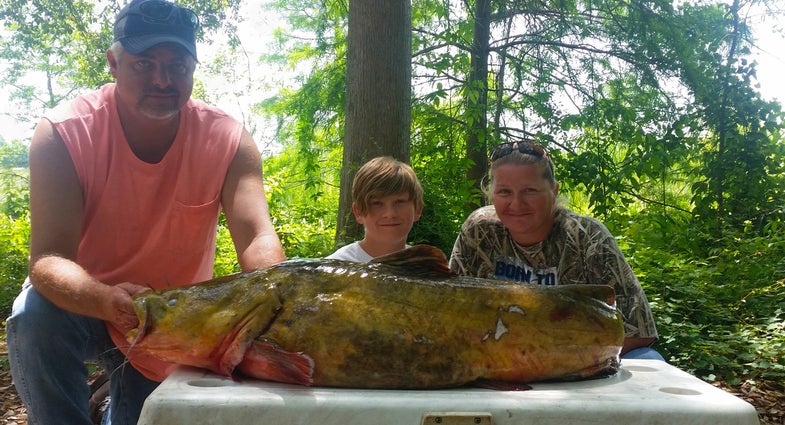 The Florida Fish and Wildlife Conservation Commission recently announced that a 13-year-old Alabama boy has shattered the state’s flathead catfish record by more than 8 pounds. The young fisherman landed the 63.8-pound monster on the Chattahoochee River earlier this month.

FWC notes that the teenage fisherman, Charles Patchen, didn’t even want to be on the water on Sunday, May 15, the day he caught the record, but his mother and stepfather, Jeanette and Bryan Atwell, coerced him to try for panfish. Initially, the family was having some success, but the bite tapered off. Purportedly, Atwell then said that a larger fish must’ve scared away the others, and the family swapped their bait from minnows to bream. Patchen missed the first bite, and when he set the hook a second time, he thought he’d snagged bottom and asked his stepfather for help. “I grabbed the pole from him, gave it a couple tugs, and the fish took off,” Bryan Atwell told the FWC. “I handed the pole back to Charles and said, ‘Get ‘em!’”

It took Patchen nearly two hours to reel in the fish on his Zebco 33 reel, spooled with 14-pound test. Atwell did his best to follow it with the boat, in hopes that the big cat would eventually tire. When it did finally give up, the two anglers had to grab-and-roll the fish into the boat because it was too large for their net. “I was so tired after reeling in in that I fell back into the boat to rest,” Patchen said. “But I’m glad my mom made me go fishing that day because now I am the catfish master!”

FWC biologist Katie Woodside measured Atwell’s catch officially the following day, and recorded it as 48.03 inches long, with a 35.43-inch girth. In recognition of his achievement, Patchen will receive a state-record certificate, which gets him one step closer to “master angler” status under the state’s Big Catch program. The previous Florida state record was a 55.05-pound flathead caught by James Auston Jr. from the Yellow River, in 2011.