Archaeologists conducting a survey of the Great Basin National Park recently made a surprising discovery: one very old Model 73... 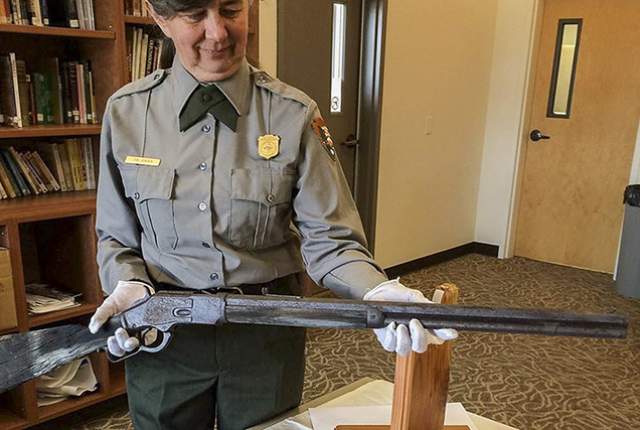 Archaeologists conducting a survey of the Great Basin National Park recently made a surprising discovery: one very old Model 73 Winchester. The .44-40 rifle was found unloaded, leaning up against a juniper tree with four or five inches of its stock buried in the ground.

“It looked like someone propped it up there, sat down to have their lunch and got up to walk off without it,” Nichole Andler, Chief of Interpretation at the Nevada park, told the Washington Post. With its wood stock weathered to gray and its metal rusted, the rifle was difficult to spot against its surroundings, according to Andler. Soon, the “gun that won the west” was all over the internet.

Factory records determined that the rifle was made in 1882, meaning it may have been lost for up to 132 years. The park staff is researching old newspapers and records in an attempt to learn the gun’s story and may return to the site with metal detectors to search for ammunition or other artifacts. The rifle will be professionally conserved to prevent further deterioration, then given back to the park to be put on display.

Since the discovery, park staff have been interviewed by more than 100 news outlets from across the globe, according to the Las Vegas Review-Journal. The Great Basin National Park Facebook page has exploded with discussion of the rifle’s authenticity and origins, and authorities are hopeful that the widespread attention will help bring forward someone with a solid lead.