So an eight-year-old boy goes fishing…and you know what’s coming next, right? From this story on mlive.com: _While king mackerel... 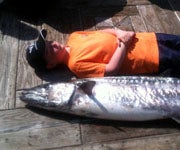 So an eight-year-old boy goes fishing…and you know what’s coming next, right?

From this story on mlive.com:

_While king mackerel fishing in Alabama over spring break last Wednesday, Andrew Quinn, 8, of Scottville, thought he latched onto something with a little more bite to it. “When I had it on, I thought it was a shark,” Quinn said. Quinn, fishing with Fish Trap Charters in Alabama with his grandfather, father and three brothers, was just about out of energy from his half-hour fight, then the fish came next to the boat. It was a 68-pound, three ounce king mackerel, a fish that was longer than Quinn is tall. …

__”We realized it was a big fish, but we didn’t know the different species and their sizes,” Andrew’s dad, Dave Quinn said. “The captain could tell it was a king mackerel, and they knew it was bigger than anything they’d ever seen.” Big it was. After the weight was taken, it was the biggest king mackerel recorded in Alabama state history. Due to an Alabama rule though, a fish can’t beat the current record-holder unless it outweighs it by .5 percent. Andrew’s fish fell short by 1.5 ounces, so he now shares the honor with Mobile’s Michael Kirchler, who’s held the record since 2002 with a catch of 67 pounds, 15 ounces._

Really? The state of Alabama is going to deny little Andrew Quinn the record because of a silly rule like that? His fish was bigger, period. I say give the kid the record. He’s earned it.