Are Conservation Efforts Affected By How Animals Look?

Here’s an interesting philosophical question: Are you more inclined to care about animals that are cute than ones that are... 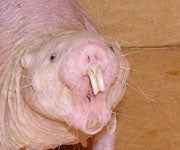 Here’s an interesting philosophical question: Are you more inclined to care about animals that are cute than ones that are ugly? Probably, according to this story in the Montreal Gazette:

For endangered species, it pays to be a large mammal with sad eyes that cuddles its babies. Glamorous animals, big predators and, above all, the extremely cute and fuzzy stand a chance of getting people to protect them and their habitats. Ugly animals – as judged by human eyes – are far more likely to be left aside when humans draw up conservation plans. Anyone care to save Ontario’s rattlesnakes? Canadian ecology experts say such thinking means we’re in danger of re-shaping nature to beautify it according to human notions of what’s pretty, saving the mammals but letting the reptiles and amphibians disappear.

It’s an idea that’s been around for a while. In fact, the term “charismatic megafauna” is almost a pejorative among some wildlife biologists. But I’d like to twist the question around a bit and transfer the concept to the hunting and fishing world. In your personal pecking order, what game species (fish, bird, or mammal) would you choose to protect at the expense of another? Which ones would you throw under the bus in order to save those favorite species?