A father and son were enjoying a beautiful day fishing Lake Michigan last week when a towering wall of fog... 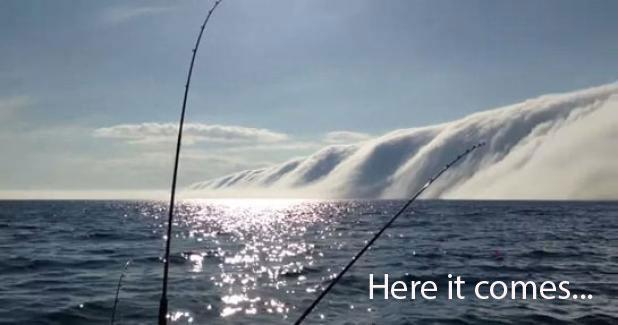 A father and son were enjoying a beautiful day fishing Lake Michigan last week when a towering wall of fog rolled over like a crashing wave, trapping them in turbulent conditions without enough visibility to find shore.

Andrew Ballard told The Detroit News that he and his father, Spencer, were near Platte Bay when they noticed what looked like thick smoke creeping closer to their boat. Andrew filmed the event and posted the video on YouTube.

“We saw these low-lying clouds about 20 miles off in the distance,” he said. “They crept up on our boat and then we could see that it was a cloud that was really close to the water. We thought about pulling in our lines and heading to shore but we were curious, so we decided to see what it would be like inside.”

Unfortunately, the scene inside the fog was not as calming as they hoped.

“The wind was about 20 mph, the waves got bigger and the temperature really dropped,” he said. “Visibility dropped to about 30 feet, and you lost direction.”

According to a meteorologist from the National Weather Service, the fog the Ballards encountered is called advection fog.

“The fog develops when warm moist air moves over really cold lake water,” meteorologist Deb Elliott said. “Fog develops as the air is cooled and is then moved along by wind. It can very thick and extensive; if they were swallowed up in it, their visibility could drop to almost zero.”

Eventually, the Ballards used their GPS to find the way home.