A muskie measuring 57 inches has been confirmed as Minnesota’s new catch-and-release record, according to the Minneapolis Star Tribune. On... 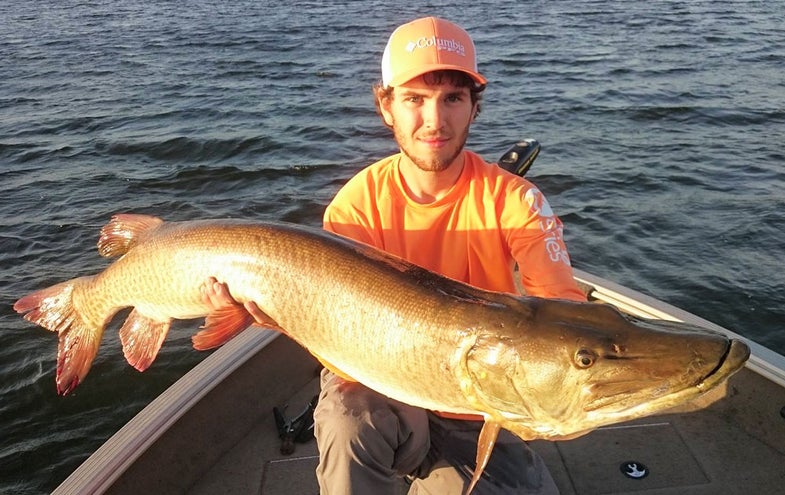 Slette's muskie is a part of a new catch-and-release program offered by Minnesota.. Facebook/Thorne Bros.
SHARE

A muskie measuring 57 inches has been confirmed as Minnesota’s new catch-and-release record, according to the Minneapolis Star Tribune. On June 24, Andrew Slette caught the fish on Pelican Lake, using a black, tube-shaped topwater lure.

“I’ll probably never top it,” Slette, a 20-year-old electrician, told the Star Tribune. The fish was 3 inches larger than the 54-inch muskie he caught last year, also on Pelican Lake.

The muskie, which was on top of structure, hit about a quarter of the way into the retrieve. Slette battled it for two minutes before his friend Josh Karch netted it. “It was a stressful minute or two,” Slette told the Star Tribune.

It didn’t take long for word to spread about Slette’s monster fish. He told KSTP that a few days after he caught the muskie, he stopped to put gas in his truck. “The guy next to me looked in and saw all the muskie gear,” said Slette, “and [he] asked if I had seen that monster caught this weekend. I said, ‘Yeah, that was me.'”

Slette’s muskie is the record in a new catch-and-release program the Minnesota Department of Natural Resources has implemented for flathead catfish, lake sturgeon, and muskies. Since it’s a length-based record program, anglers don’t have to keep fish in order to enter them. The state’s other record program is based on the certified weight of a fish. The record muskie in that program, caught in Lake Winnibigoshish in 1957, weighed 54 pounds and was 56 inches long.