This month, Ann Rodgers, 72, of Tucson, Arizona, survived nine days in the desert with her dog Queenie after her... 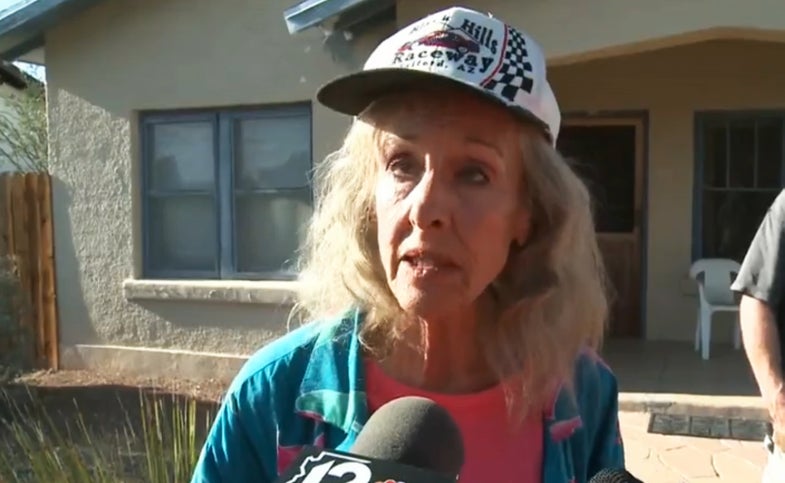 This month, Ann Rodgers, 72, of Tucson, Arizona, survived nine days in the desert with her dog Queenie after her car broke down in the White River Indian Reservation. To stay alive, Rodgers ate plants and drank from streams, as well as built fires at night, with temperatures dipping below freezing.

When Rodgers became stranded, she spent a night in her car before climbing a tall peak in search of better phone reception. She became disoriented and spent the next eight days surviving in the desert, eating green plants and drinking stream water.

She told NBC News that at times she thought she might not make it, but then resolved to fight on. “All right, if this is the end—if this is it—at least I’m going to die in the most natural beautiful cathedral I have been in in a long time,” she said, “and then I thought, ‘No, I ain’t giving up yet.'”

According to the story, Rodgers tried building signal fires, but it was finally the word “Help,” which she had spelled out in large sticks and rocks, that led rescuers to her. She wasn’t at the site, but had left a note under one of the rocks telling anyone who found it where she was headed. Rescuers found her dog first, then spotted Rodgers thanks to a signal fire she’d built trying to attract the attention of helicopters.

Rodgers survived her ordeal in good condition, having lost some weight and gained some scratches. “Old people are thought of as not always as able to do things as others, which is true in many ways,” she told reporters. “However, because we age, wisdom and memories become part of your knowledge base that help you survive.”