Photograph via Imgur Ginormous: that’s what comes to mind when looking at Lake Eufaula’s new record alligator. _The Dothan Eagl_e... 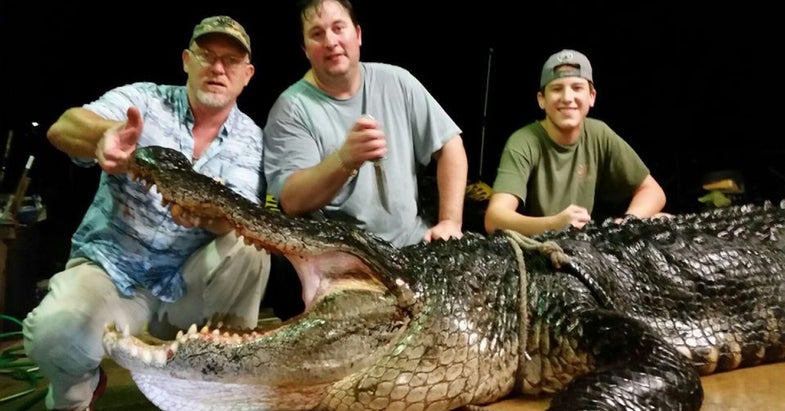 Ginormous: that’s what comes to mind when looking at Lake Eufaula’s new record alligator. _The Dothan Eagl_e reports that the gator, caught in Alabama near the Georgia border, is 13 feet, 6 inches long. Though the record is determined by length, the alligator’s heft is just as impressive at 920 pounds.

Three men and a guide caught the beast—which took several hooks, a harpoon, and knife to kill—on the first night of Alabama’s alligator season.

“We went to get a big gator,” says Jeff Gregg, one of the men. “We were going to take as long as it took to get the right gator, and just by luck within 30 minutes out in the lake we saw it.”

Gregg, who runs a jewelry store in Birmingham, plans on turning the claws and teeth into jewelry and using its approximately 250 pounds of meat for a Labor Day feast. Also, he plans on mounting the hide as a tribute of the accomplishment. “This is a dream…something we would only dream about getting,” he says. “We’re really blessed. In the South, they’re the largest predator that we have; they’re magnificent creatures.”

As Fox Sports notes, the gator is believed to be the second largest ever caught in Alabama, trailing a world-record, 1,011-pound, 15-foot gator caught last year.