Dr. M. Sanjayan is a leading global conservation scientist, an Emmy-nominated news contributor, and a Montana outdoorsman. He hosts a... 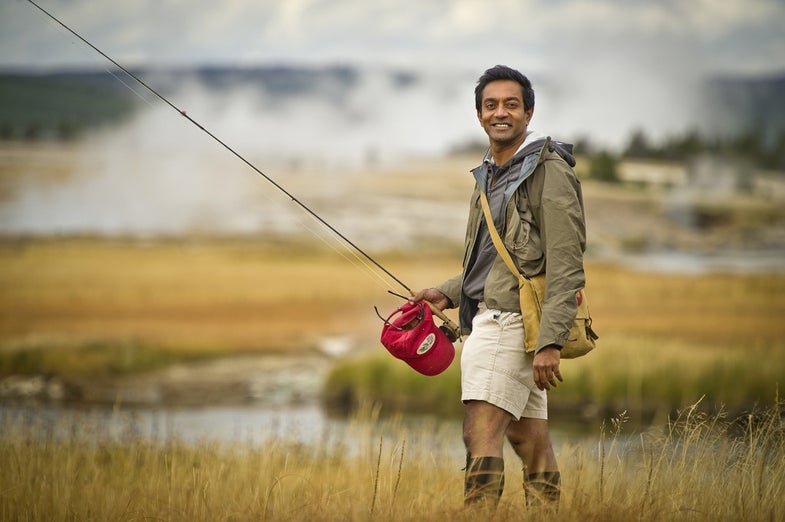 Dr. M. Sanjayan is a leading global conservation scientist, an Emmy-nominated news contributor, and a Montana outdoorsman. He hosts a new five-part television series called EARTH A New Wild, which will begin airing tomorrow on PBS. In the series, Sanjayan explores wild places in 29 countries across the globe and focuses on how wildlife and people are sharing the same habitat. He spoke with Field & Stream about his own experience with the outdoors, as a hunter and a fisherman, and how it has driven his campaign to protect and maintain our planet.

F&S: What is your personal relationship with wildlife at home in Montana?

MS: I’m an avid flyfisherman—in both freshwater and saltwater. Since I was maybe 4 years old, I’ve always had a fascination with things that live underwater. I would get a safety pin, bend it, bait it, and sit in the rice fields catching little fish. Once I started flyfishing, I could never go by a body of water without really reading it. With every river, every stream, every ocean I come near, I am immediately looking at where the fish are, why they are here and not there, and what they are eating. You start working this out.

I also hunt ducks, geese, deer, and elk. It’s part of the way of life here. I’m not a trophy hunter, but I’m really into eating off the land and supporting that culture. I think the reason why I enjoy it so much is it allows you to look at a landscape in an intelligent way. It’s probably why I moved to Montana. This is really the only landscape that, if Lewis and Clark were to come back today and do their original voyage of discovery, all the animals and plants they once saw would still be here. When you’re part of that landscape, not only do you see wild nature at your back door, but you also realize that it’s a working landscape that contains people. Somehow, the people find that balance, and each group benefits the other. The wildlife of Montana—the fisheries and waterfowl in particular—thrive because people value it. At the same time, human communities thrive because they have learned to value what they have.

F&S: How does that relate to your conservation work?

MS: Saving nature really is about saving ourselves, and this isn’t something we’re doing for some distant benefit or for a distant generation—it really is material to our lives. Think about a traditional method of saving nature, which would be creating a national park, staying out of it, and looking at nature from afar. That’s great. Yellowstone is there for a reason and it’s an amazing resource for the world. But what if you want people everywhere to appreciate and understand the value of nature? I think that hunting and fishing are fantastic ways in which people can reconnect.

A river that I fish all the time is constantly changing—sometimes because of people and sometimes just because. When you hunt or fish, you fully appreciate the trade-off that Montanans have to make between how much water they use for agriculture and how much they leave in the river for fish. In dry years, you can see the draw of water and how it impacts the fish populations. Anyone who goes outside repeatedly will see those patterns.

F&S: Do you think hunters and fishermen have a greater inherent sense of responsibility to maintain that balance and improve the situation for fish and wildlife at risk?

MS: Yes. I think that hunters and fishermen are a very strong voice for conservation. You wouldn’t have the waterfowl numbers you have in the United States today without duck hunting. You wouldn’t have the kind of blue ribbon trout streams we have today without Trout Unlimited and without fishermen. I think that for a hunter or a fisherman to become a conservationist, it’s not much of a jump. Most of them already are. More so now than ever, it’s more than just self-service. It’s appreciating the natural world. Certainly, Field & Stream and publications like it espouse the ethic that, whether or not you benefit from it, conservation is a useful and good thing.