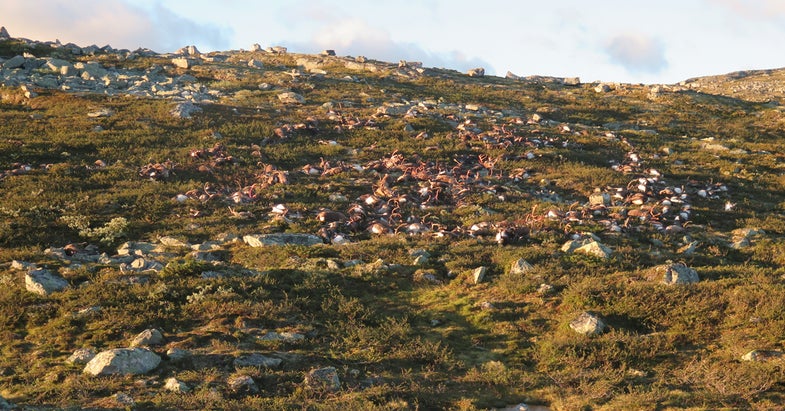 Last week, a lightning strike killed 323 wild reindeer, NPR reports. The reindeer were struck on the Hardangervidda mountain plateau, in central Norway, which holds about 2,000 of the migratory deer during the year. About 70 of the reindeer were calves. Hunters discovered the remains and alerted the Norwegian Nature Inspectorate, which is now handling the bizarre case.

“We’ve heard about animals being struck by lightning and killed,” Knut Nylend, Norwegian Nature Inspectorate spokesman, told the wire service NTB, “but I don’t remember hearing about lightning killing animals on this scale before. Reindeer are pack animals and are often close together. During a heavy thunderstorm, they may have gathered even closer together out of fear.”

Although the reindeer most certainly died from a lightning strike, as a precaution, Norwegian wildlife officials are testing the remains for chronic wasting disease, since it claimed a reindeer in northern Norway last year.

John Jensenius, a NOAA lightning safety expert, explained to The Verge how a single lightening bolt could decimate more than 300 reindeer: Though lightning strikes typically kill only 10 to 20 animals when they hit a herd, a lightning strike on July 18, 1918, in American Fork Canyon, Utah, killed 654 sheep. Jensenius says that although animals do huddle together during storms, they don’t have to be touching to conduct a lightning bolt’s electricity. Instead, he said, ground current—the spreading of energy along the earth—is the real killer. In the case of the Hardangervidda herd, ground current—which travels up one leg then down the other of animals or persons within proximity—killed every reindeer in a 50- to 80-foot diameter. Animals are especially susceptible to ground current, Jensenius added, since their legs are farther apart than humans’, so the current travels more easily inside their bodies.