Alabama outdoorswoman Mandy Stokes drew her first-ever alligator tag earlier this year. This past weekend, she boated a new pending... 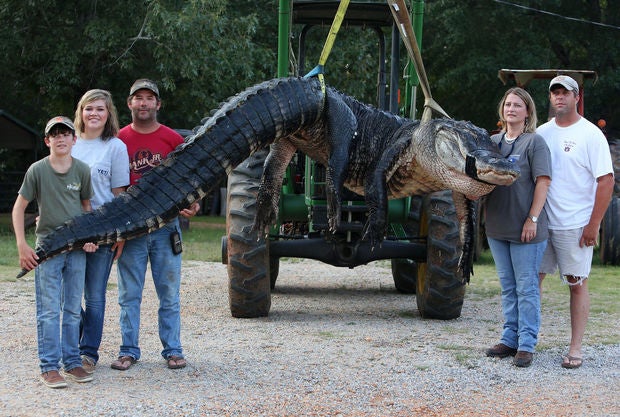 Alabama outdoorswoman Mandy Stokes drew her first-ever alligator tag earlier this year. This past weekend, she boated a new pending state record—and one of the largest gators ever killed by a hunter.

According to the Birmingham News, Stokes’s gator measured 15 feet and weighted 1,011 ½ pounds. The monster was so big it actually destroyed the winch that state biologists from Wildlife and Freshwater Fisheries used in their first attempt the weigh the animal. If certified as a record, Stokes’s alligator would crush the current state record—an 838-pound gator killed in 2011 by Alabama resident Keith Francher.

“Truthfully, after I saw the Fancher Gator, in my mind I was thinking there’s no way we can catch anything bigger than that,” Stokes told the Birmingham News. “When I finally saw the full-body mount at the Gee’s Bend Terminal, the main thing I remembered was the size of its feet. When I saw the size of the foot on this one, I knew it was a good one.”

Stokes had some help during the hunt. Her crew included her husband, John Stokes; brother-in-law Kevin Jenkins; and his children, Savannah, 16, and Parker Jenkins, 14. The fight, which began late Friday night, lasted more than five hours. Finally, on Saturday morning—after they’d fought with the gator all over the Alabama River—Stokes landed a kill shot on the alligator, then the family slowly made their way to the check station.