Last week, whale watchers near Juneau, Ala., found themselves on an unexpected rescue mission. According to KTOO, two struggling deer... 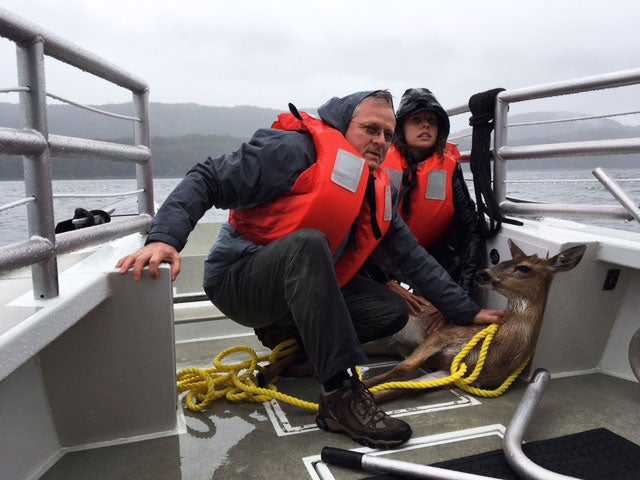 Last week, whale watchers near Juneau, Ala., found themselves on an unexpected rescue mission.

According to KTOO, two struggling deer were spotted swimming on the high sea. A large tour boat tried but failed to rescue the animals before giving up. At this point, Audrey Benson, of another local boat-tour service, decided to step in. He and his crew eventually managed to lasso one of the struggling deer and bring it aboard. The second deer couldn’t be recovered and likely drowned. Benson and his crew then released the surviving deer on a nearby island.

The deer’s teeth were chattering when it was pulled on board and it couldn’t stand on its worn-out legs. “It was the craziest thing I’ve ever seen on any of my tours,” Benson told KTOO. “I’ve never even been that close to a deer. …It was very intense.”

Stories such as this surface a few times a year, but the reasons why deer take to the water are complex. Biologists have pointed out that fear, presumably of predation or humans, can drive deer to the water as an escape. Then, the deer may continue swimming in the same direction once they’ve begun. Moreover, when resources dwindle, deer swim to areas where competition for food and shelter is less intense. Biologists have noted that deer have been seen swimming from the coast of Ohio to Lake Erie islands, likely forced to break from their family groups in search of less densely populated locations

Deer often swim from one island to another in Alaska, too, but the Alaska Department of Fish and Game says drownings such as this are rare