Michael Snowden of Sitka, Alaska, is lucky to be alive after his quick-thinking son-in-law was able to shoot two brown... 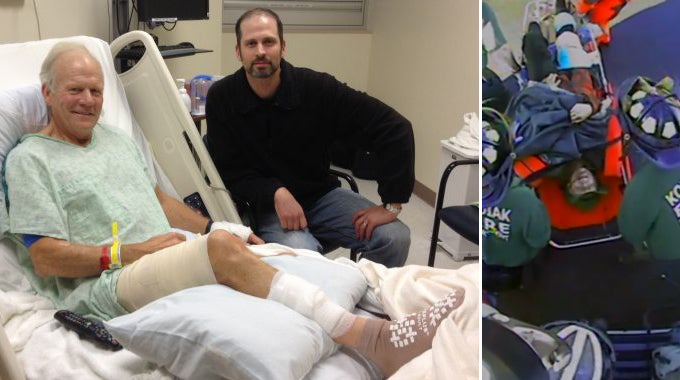 Michael Snowden of Sitka, Alaska, is lucky to be alive after his quick-thinking son-in-law was able to shoot two brown bears that attacked him on a small island near Kodiak earlier this month. The bears apparently followed the scent of the deer that the men had just harvested and dragged through the woods towards the boat that dropped them off.

According to the Alaska Dispatch News, Snowden’s son-in-law Jeff Ostrin shot the deer on the sixth day of a weeklong hunting trip on Sally Island. The men gutted the deer and dragged it partway to the boat, and were just pausing to eat sandwiches when the bears charged.

Less than a mile away, hunters already aboard the boat spotted the bears and tried to warn Snowden and Ostrin via radio and by firing warning shots into the air. Unfortunately, the men didn’t have their radios turned on and assumed that other hunters were just shooting at deer.

“The bear kind of exploded out of the brush,” said Ostrin. “We couldn’t even see it coming. It went straight for Mike, and it knocked him down and bit onto his leg and started shaking its head and dragging Mike around on the ground quite a bit. There was zero time to do anything from the moment we saw it to the moment it was on top of Mike.”

Snowden said he lost his grip on his rifle and couldn’t pull his revolver from its holster. Ostrin, however, took a step back, waited for a clear shot, and fired at the bear—once in the hindquarters and once in the chest. Still alive, the bear reportedly fell and dragged Snowden down the hill before Ostrin could fire a third shot that finally killed the bear. As Ostrin radioed for help and checked his father-in-law’s injuries, a second bear emerged from the brush. He reactively shot and killed it.

“It all happens in seconds,” Snowden said. “You don’t have time to think. You’re not necessarily thinking that you’re going to die, but I don’t know what keeps you thinking you’re going to live either.”

The hunters aboard their boat radioed the Coast Guard for help and scrambled up the hill to help keep Snowden warm and conscious. His hamstring was nearly severed. The Coast Guard airlifted him to Providence Kodiak Medical Center, and one minute of the dramatic rescue footage was posted to the Defense Video & Imagery Distribution System’s website. The 68-year-old hunter received 100 staples to the back of his thigh but, remarkably, he’s already been able to walk around the hospital with a cane.