File photograph courtesy of National Parl Service/Flickr As The Alaska Dispatch News reports, a musk ox gored and killed a... 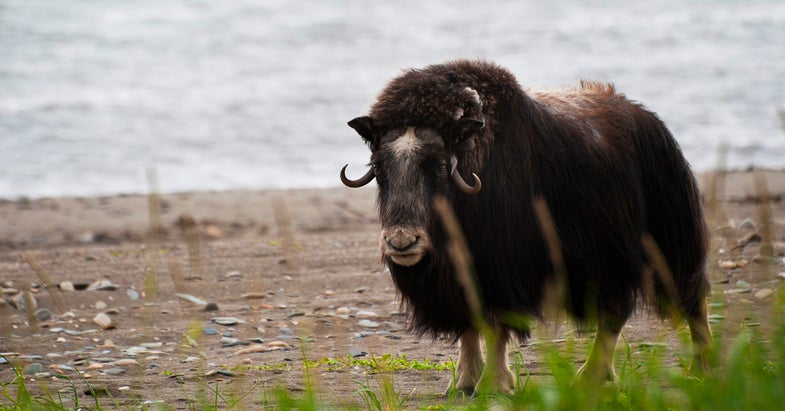 As The Alaska Dispatch News reports, a musk ox gored and killed a sled dog in Nome, Alaska, in mid-August. It was the first such incident this summer, but a reminder to Nome residents of last summer’s rash of musk ox attacks.

During the incident last month, the musk ox was shot and killed in what Alaska Department of Fish and Wildlife labeled “a clear case of defense of life and property.” The musk ox was donated to the Nome Covenant Church, where it was butchered by parishioners and kept in the church freezer.

Musk oxen moved into the Nome area in larger numbers than usual in 2014, invoking several dog gorings, some of which proved fatal. “This summer has been much better with regard to conflicts with musk ox,” said Bill Dunker, wildlife biologist for the Alaska Department of Fish and Game. “We’re still having them on occasion, but certainly last year was kind of the ‘perfect storm’ of musk ox conflicts in the Nome area. It’s certainly been the case that this year has been much less active with regard to musk ox conflicts.”

No one knows for sure why musk oxen were present in Nome in high numbers last year, although some suspect brown bears may have pushed them into the area.

Last year, the Department of Fish and Game tried using rubber bullets, bear decoys, and bear urine to minimize conflicts between musk oxen and people, and also instituted a limited special oxen hunt. This year, the department has built what it hopes will prove to be a musk ox-proof fence around the Nome airport to prevent further incidents.