It’s been cold in Boston—so cold, in fact, as to set new record lows, and to freeze swans in the... 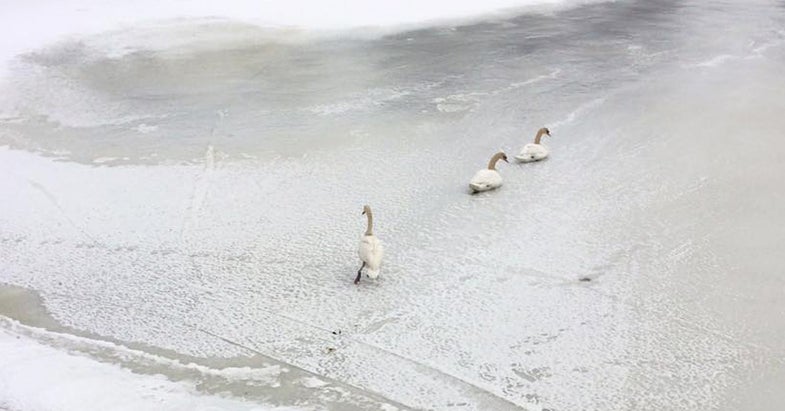 It’s been cold in Boston—so cold, in fact, as to set new record lows, and to freeze swans in the ice. According to Boston.com, firefighters in Southborough were called to rescue frozen swans from an area reservoir three times in one day. To achieve this, firefighters had to spray the swans with warm water until their feathers and feet thawed and the birds could move again.

Fire chief Joe Mauro told Boston.com that this was the department’s first swan rescue on ice, though they have helped deer and dogs on the reservoir in the past. “There’s usually certain areas of the reservoir where there’s open water,” he said. “They usually migrate somewhere else, and I think just because it was such a cold blast for that 24 to 48 hour period, they got stuck.”

Waterfowl rarely freeze in place like this because their feet give off very little heat—usually not enough to melt ice. In what is known as a counter-current heat exchange, the veins and arteries in their webbed feet are set very close together so that the warm arterial blood warms the cold blood in the veins, which in turn cools the blood in arteries. Should the ice melt, though, it can then refreeze, trapping waterfowl.