With the help of Capt. Kevin Beach, an angler visiting from North Dakota brought in a 580-pound mako shark while... 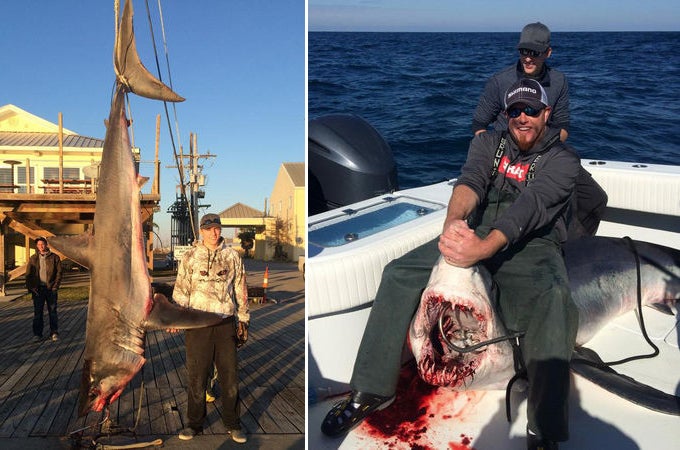 With the help of Capt. Kevin Beach, an angler visiting from North Dakota brought in a 580-pound mako shark while targeting yellowfins south of Venice last week. Landon Rachel manned the rod during an hour-long battle with the shark, which ate a 30-pound king mackerel on two 10/0 Mustad hooks and jumped four times during the standoff.

The beast measured 117.5 inches from its lower jaw to the tail fork, and ranks as the fourth largest mako landed in Louisiana waters, according to the Times-Picayune. “We first saw him about 70, 80 yards down the chum slick, just swimming all lit up, blue and pretty, on the surface,” Beach said. “We tried to feed him a bonito, but he didn’t want it. I’d let it sink down 50, 60 feet, and then start reeling it up. He’d come and charge the boat. He’d get right up to the bait, and then he’d just turn off, so I’d drop it back down. We did that probably 10 times. He’d zoom straight up to the boat. A couple times, I thought he was going to jump in the damn boat.”

Once he rigged up the king mackerel for Rachel, things heated up. “I don’t know if it was the action of that long fillet just flapping in the water, or if he just wanted something a little bit fresher than the bonito, but it hit the water, got about 10 feet down, and he just swam up and sucked it down,” Beach said. “As soon as we hooked him, we got four really, really cool jumps out of him, and then he never got off the top shot. He never got down to the braid. He just stayed within 50 feet of the boat for about 30 minutes.”

Beach didn’t want to gaff the shark yet, so Rachel battled for 30 more minutes before bringing it boatside. It took a normal 8-foot gaff, a tail rope, a flying gaff, and five men to get the mako over the transom and into the boat. The crew iced it down as much as possible, and covered it with the bean-bag chairs Beach keeps on the 37-foot Freeman for days with rough seas.

At Cypress Cove Marina’s certified scale, the mako weighed 580 pounds. Beach also had the assist on a 765-pounder caught by a client in 2006, the No. 2 mako in the state. The one to beat is 1,149 pounds, caught in 2009, and this is the time of year to do it, says Beach. “It’s a combination of the water being cooler as well as them just following the food. The bonito are coming in on the fry, and the tuna and wahoo are feeding on them, and the makos are feeding on the tuna and wahoo.”