Angler Gets Second Chance at Fish of a Lifetime

Photograph via The Times-Picayune Mike Laviolette, an angler from the heart of New Orleans, Louisiana, makes it a daily ritual... 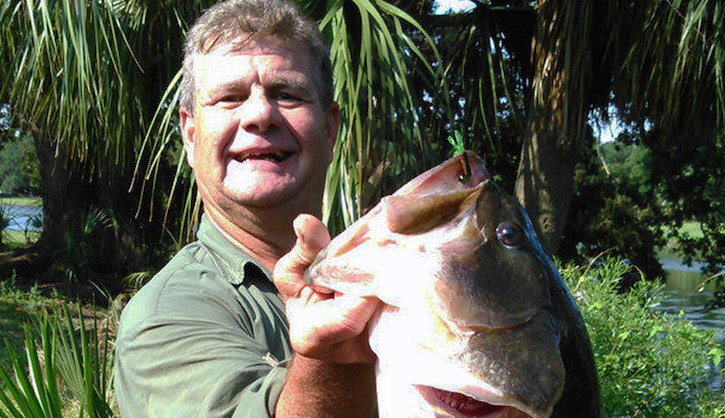 Photograph via The Times-Picayune

Mike Laviolette, an angler from the heart of New Orleans, Louisiana, makes it a daily ritual to fish one or more of the lagoons at City Park.

According to The Times-Picayune, in late August, Laviolette hooked a once-in-a-lifetime bass, but as he worked it to shore, the hook popped out of its mouth as it neared his feet. Laviolette says that he was so haunted by his big-fish miss that he returned to the same spot day after day, hoping to have another shot at landing it.

“I went back the next evening, and I caught a fish that was about 6 ½ pounds,” Laviolette said. “He didn’t have the hook mark in his lip, though, so I knew it wasn’t the same fish.”

A few days later, Laviolette still wasn’t having any luck, so he decided to take a break and grab a bite to eat and cup of coffee at a nearby café. Afterward, he made his way back to the water and convinced himself to make a few more casts. Amazingly, a big fish struck on the first retrieve.

“I set the hook, and he zipped line out and started jumping,” Laviolette said. “The last time, I made the mistake of trying to reach down and pull him in. This time, I just flipped him in, and the hook came right out of his mouth. Thank God I horsed him, or I would have lost him again.”

Once he had the fish in hand, what astonished Laviolette more than the fish’s size was that it was indeed the same fish he hooked and lost days earlier—two hook marks on both sides of its mouth confirmed it was the very bass he hoped to find.

But now Laviolette didn’t know what to do with the fish. He wanted to weigh it, but he didn’t have a scale, and he didn’t want to dispatch and put it on ice. So, Laviolette secured the catch onto a 25-foot stringer and attached the other end to a bush so that he could keep the fish alive while weighing his options.

Laviolette phoned the Louisiana Department of Wildlife and Fisheries, and personnel told him that they could weigh the catch, but he had to bring it to them, which, Laviolette knew, would result in its demise. Fortunately, an angler soon came to his aid with a scale and tape measure—the fish measured 25-inches long, with a 16-inch girth, and weighed more than 9 pounds.

Still, Laviolette wondered if he should keep the fish, so he called his friend and taxidermist, Ray Chagnard, for a second opinion.

“Ray said, ‘Man, let that fish go. You’ve got the pictures. You know what you caught. Let it go.’ So that’s what I did,” said Laviolette, who already had four bass, all weighing more than 7 pounds, in the process of being mounted.