In Minnesota, just days before the Fourth, a bald eagle hanging precariously from a 75-foot pine tree got a major... 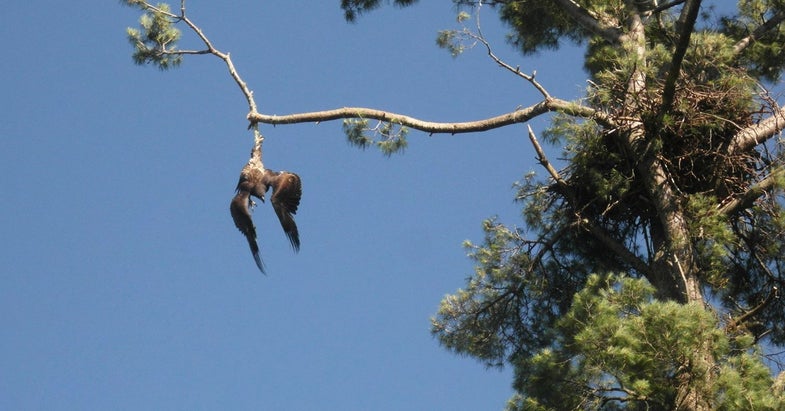 Jason Galvin fired 150 shots to sever a branch and a four-inch piece of rope.. Jackie Galvin via Facebook
SHARE

In Minnesota, just days before the Fourth, a bald eagle hanging precariously from a 75-foot pine tree got a major assist from an Army veteran. According to the Minneapolis Star Tribune, to free the raptor, Jason Galvin fired 150 shots from a .22-caliber rifle to chip away at a branch and sever a four-inch piece of rope that had snagged the eagle’s talons. The ordeal lasted 90 minutes, and a veterinarian at the University of Minnesota Raptor Center later confirmed that none of Galvin’s shots injured the bird.

Galvin’s wife, Jackie Galvin, recounted the story on her Facebook page. Purportedly, on June 30, Jason went to the store, and upon his return, he noticed an eagle hanging upside down from a tree, tangled in a rope. Jackie called a variety of agencies, including the Minnesota Department of Natural Resources, but she was told that the eagle had been there for more than two days and had already died. The bird’s movements, she was told, were a result of the wind. Jackie disagreed and enlisted Jason to shoot it free.

Jason spent eight years in the Army and did two tours in Afghanistan, the Star Tribune reports. He possesses sharpshooting skills, but he told the Star Tribune that he doesn’t shoot as often as he’d like. Also, he was concerned about breaking federal laws should one of the bullets injure the eagle. But his wife was insistent. A neighbor lent Jason a .22-caliber rifle (which had a better scope than his .22, Jackie wrote on Facebook), and after a couple of practice shots to test the wind, he got to work.

“An hour and a half later and 150 bullets, the eagle broke free from the branch and fell 75 (feet) into the trees…,” Jackie wrote.

And how did Jason react after the bird fell to relative safety? “I just needed to decompress,” he told the Star Tribune. “Plus, my wife didn’t want me going into the trees because she said there might be poison ivy.”

Raptor Center veterinarian Michelle Willette told the Star Tribune that the twine in which the eagle was tangled likely came from its own nest, having wrapped around the branches as it was exploring and trying its wings. “We have seen a lot of crazy rescues but this one is certainly unique,” Willette said.

The eagle, which Jackie subsequently named Freedom, is now in veterinary care and recovering.

*This post has been updated slightly since it was first published.