Atlantic Sturgeon Deaths a Mystery in the Hudson

Photograph courtesy of Hudson River Slop Clearwater What’s chopping up the Atlantic sturgeon in the Hudson River? This year alone... 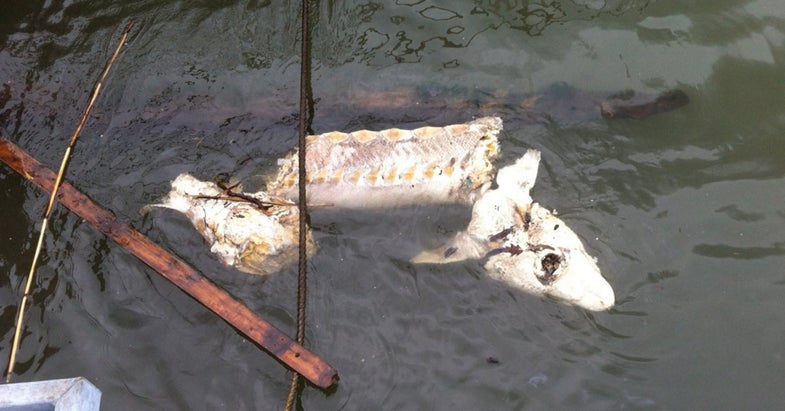 What’s chopping up the Atlantic sturgeon in the Hudson River? This year alone some 40 of the endangered fish have been found dead—many of them cut into pieces—in the river. According to The Lower Hudson Journal News, the watchdog group Riverkeeper believes the fish, which date back to prehistoric times, are being killed by boats carrying workers to and from the massive Tappen Zee Bridge project. Reports of dead sturgeon in the river have skyrocketed, totalling 116 fish, since the $4-billion project began, in 2012. In comparison, between 2009 and 2011 only half a dozen sturgeon were found dead in the Hudson.

A 2007 study estimated the spawning population of Atlantic sturgeon in the Hudson to be just 870 fish, so the recent findings are especially bleak. Capt. John Lipscomb of Riverkeeper believes that the boats going to and from the bridge travel too quickly through the shallow water where sturgeon feed, often catching the fish with their propellers. He believes that the boats should limit their speed to 6 mph and install cages installed around their propellers to help avoid killing the fish.

Though federal and state officials agree there has been an increase in dead sturgeon since 2012, they point to the fact that the Atlantic sturgeon was put on the endangered species list that year, increasing public awareness about the species. “While we agree that the number of reports has increased over the last few years, it also seems that the level of interest and effort to report these sightings has increased,” wrote Kimberly B. Damon-Randall of the National Marine Fisheries Service, a federal agency that oversees offshore marine life.

_The Journal News _notes that project officials believe there’s no way to tell which boats are responsible for the sturgeon deaths or whether there’s been a true increase in the fish’s death at all. John Lipscomb, however, says that that is “really a lame response.”

The New York Times reports that this month a representative of Riverkeeper filed a petition with the National Marine Fisheries Service to further investigate the issue and take action to prevent the sturgeon from being killed.