While the scene wasn’t as dramatic as the one from Sharknado, the fact that a small shark recently fell from... 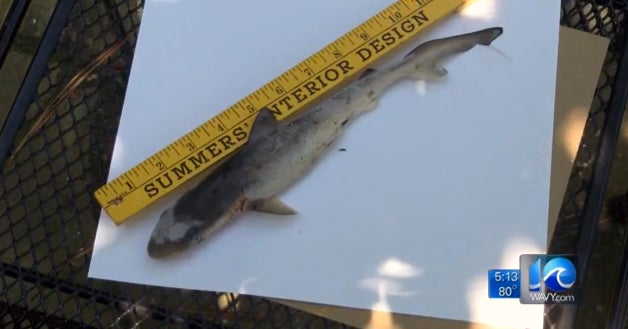 While the scene wasn’t as dramatic as the one from Sharknado, the fact that a small shark recently fell from the sky into Virginia resident Sue Bowser’s wooded backyard, did have her temporarily scratching her head.

Bowser told a local TV station that her 5-year-old grandson found a 13-inch dogfish shark (sometimes called a sand shark) on a concrete slab near their backyard pond on June 26, and she initially reacted with skepticism.

“This could be the shark house, but hopefully not too many more will be falling from the sky,” Bowser said. “The kids found it, and they came upstairs, and they were all excited and said, ‘We found a shark in the backyard.’”

When she went to look for herself, she started putting the pieces of they mystery together—starting with marks on the fish itself. She believes a flying osprey accidentally dropped it.

Word of the family’s discovery spread throughout Bowser’s neighborhood, so rather than get rid of it, she’s been keeping it in the family freezer—right next to their homemade applesauce—to show anyone who wants to see it with their own eyes.

“I would like to preserve the shark because a lot of people have asked about it, and I think it’s just so unique,” said Bowser.