Somewhere in New York City, a coyote is hiding out after evading police officers and their tranquilizer guns — for... 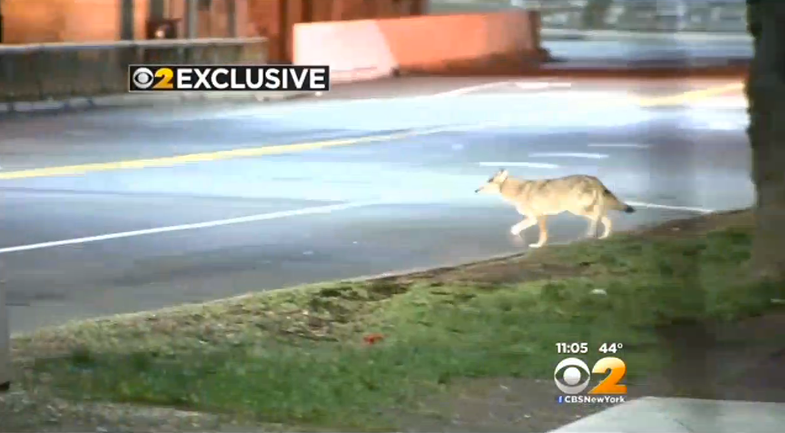 Somewhere in New York City, a coyote is hiding out after evading police officers and their tranquilizer guns — for the second time. Known as the Upper West Side coyote, the elusive canine was seen again early Thursday following a sighting on Wednesday night. Cops patrolled Riverside Drive near W. 79th street following Wednesday’s confirmed sighting at 2:45 a.m., but were still unable to locate the coyote nearly six hours later.

The episode, and all of the news coverage that followed it, has prompted wildlife experts to question if wild animals are becoming too comfortable in the urban jungle. Coyote sightings are fairly common in cities and suburbs, but recently a rabid coyote attacked a man who was walking his dog in Norwood, New Jersey.

The rabid coyote was captured and euthanized for testing on Monday night, and the discovery of two dens — one near a school — prompted police to issue a warning in to stay inside until all coyotes in the area can be rounded up. They are calling it a “coyote curfew,” according 6abc.com.

“We are aware that coyotes have been expanding their range for at least the last decade in New York City,” Sarah Aucoin, director of the city Parks Department’s Urban Park Rangers, told MSN.com. “Through our partnership with research scientists, we know we have breeding pairs in the Bronx. Once you have breeding pairs, it isn’t surprising to see young coyotes who are being kicked out by their parents and need to find their own territory.”

While some of the coyotes captured have tested positive for rabies, the coyote-at-large in Manhattan is believed to be healthy and disease-free. Officials believe that it has most likely retreated back to its den and will appear again in the near future. The question remains whether it will continue to elude officers.