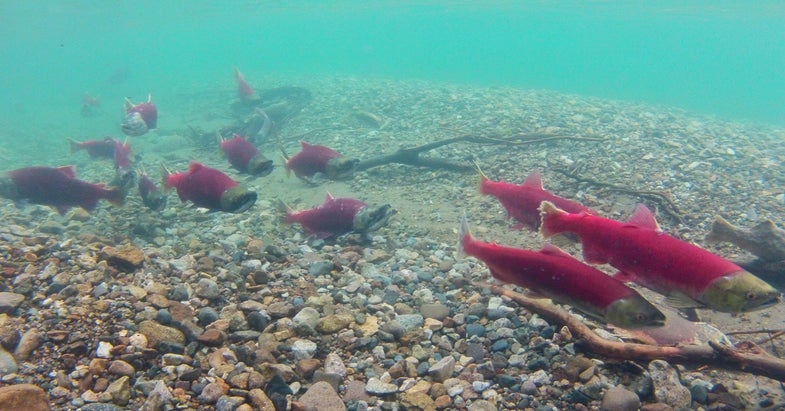 There’s something fishy in British Columbia’s water that’s making the wild salmon sick—and locally farmed salmon may be to blame. According to a study published in January in Virology Journal, more than 1,000 wild salmon within BC’s waterways and farmed salmon have tested positive for the infectious salmon anaemia virus (ISAV). This is a major cause for alarm, since the virus is detrimental to wild salmon along the Pacific coast, and because it can also cause economic turmoil within the farmed-salmon industry.

“The potential that viruses such as ISAV are contributing to widespread decline in sockeye salmon populations cannot be taken lightly,” study co-author Rick Routledge told Food Safety News. “The findings in this paper should lead to development of more sensitive screening for this specific virus. This opportunity needs to be pursued with vigor.”

Most likely, the virus entered Canadian waterways as early as 2011; however, when the Canadian Food Inspection Agency (CFIA) tested fish that year, ISAV was not found, according to Food Safety News. Prior to the Jan. 6 study, the CFIA notes that instances of ISAV were found only in New Brunswick, Nova Scotia, Prince Edward Island, and Newfoundland. In fact, the ISAV fact sheet on its website has not been updated yet to reflect this new discovery.

But how are the salmon becoming infected? Researchers say that sea lice, a small marine parasite that is extremely common in BC’s salmon farms, may be the culprit. According to the Coastal Alliance for Aquaculture Reform, salmon farms are perfect breeding grounds for sea lice and “significantly increase the number of lice in surrounding waters.”

Craig Orr, conservation advisor for Watershed Watch, acknowledges the significance of this, and told Food Safety News, “Finding ISAV genetic material in a sea louse from a heavily salmon farmed region, the Discovery Islands, significantly elevates my concern that the pathogen release from the open net farming industry is far more serious than anyone knew.”

If ISAV is now indeed a threat to the Pacific Ocean and its associated watershed, it could expand beyond Canada and BC and potentially endanger more North American wild salmon. In fact, ten years ago, ISAV spread to Chili, infecting Atlantic salmon eggs and causing an endemic that caused $2 billion in damages, according to Food Safety News. As officials try to determine solutions and curb further outbreaks in the U.S., a lawsuit has been filed against the U.S. Environmental Protection Agency for letting the situation occur in the first place.

CBC News points out, however, that since the study’s release, the BC Salmon Farmers Association has disputed its claims, calling the results a “false positive.”

_For over four years Ms. Morton has been reporting positive PCR tests for ISAV from BC samples, none of these results have been confirmed by the CFIA using OIEA standards. We have great concerns about the methodology, and the ethics of the researchers involved given their history of reporting false positives with respect to ISA. None of the results reported in this paper have been confirmed by an outside laboratory.

ISA has never been detected in fish on the west coast of North America. This has been confirmed through thousands of tests by CFIA, as well as thousands of tests by authorities in Washington State, Oregon, and Alaska. Farm-raised salmon in B.C. are healthy and have never shown signs of sickness from ISA. This report claims to find an ISA sequence, but the researchers admit they were unable to verify it using necessary, globally standard follow-up tests. Their study also confirms they found no evidence of the ISA disease in B.C. Fish._

The BC Salmon Farmers Association also sent a statement by Dr. Gary Marty, a senior fish pathologist with the BC Ministry of Agriculture, which you can read here.