If black sea bass or sawfish knew who the Bee Gees were, “Stayin’ Alive” would most certainly be their theme... 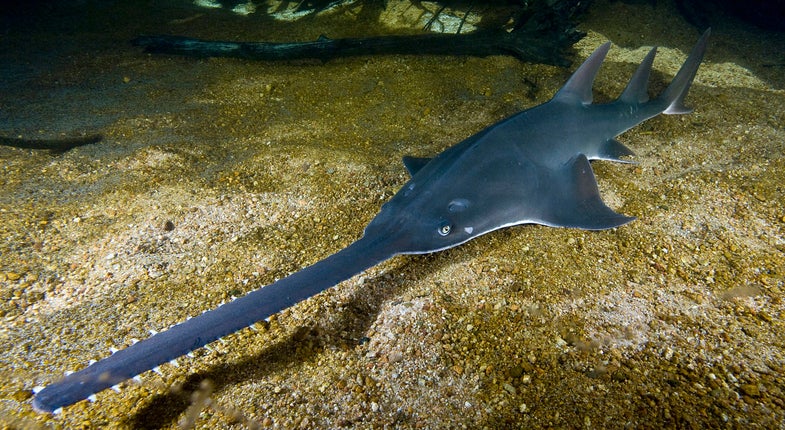 If black sea bass or sawfish knew who the Bee Gees were, “Stayin’ Alive” would most certainly be their theme song, given what two recent studies have uncovered about the extreme measures these fish will take to perpetuate their species.

Scientists have long known that black sea bass are protogynous hermaphrodites, meaning females can transition to males during their lifetime, but little was known about why this occurs. However, researchers at Rutgers University have recently discovered this behavior may be dependent on the number of male fish in a local population. During the study, the research crew, with the help of local anglers, caught, tagged, and released nearly 1,500 bass, a third of which were caught again at the end of the study.

“Through the research, we found about 30 percent of the population spawn first as males,” Olaf Jensen, who led the study, told Phys.org. “Then after the summer spawning season, some female bass become male. From an evolutionary perspective, it’s a perfect way to keep balance in a population.”

The study’s implications are noteworthy, given the commercial fishing industry’s dependence on black sea bass, resulting in overfishing and recreational-fishing restrictions.

A similar evolutionary marvel could be even more important for endangered sawfish. A study published in Current Biology in June found 3 percent of sawfish were the result of “virgin births,” or asexual reproduction known as facultative parthenogenesis. The researchers from Stony Brook University, the Florida Fish and Wildlife Conservation Commission, and the Field Museum of Natural History were testing whether relatives were reproducing with one another due to the species’ dwindling population. Instead, DNA fingerprinting revealed female sawfish were reproducing without mating.

Virgin births are uncommon—and usually unsuccessful—in vertebrates, but this was not the case for the sawfish produced through parthenogenesis. “The seven parthenogens we found looked to be in perfect health and were normal size for their age,” Florida FWC researcher Gregg Poulakis told The Washington Post. “This suggests parthenogenesis is not a reproductive dead end, assuming they grow to maturity and reproduce.” Scientists caution this method is not enough to revive the sawfish population, but it’s a start.