Jeff Thomason, host of Outdoor Channel’s Predator Pursuit, arrowed and landed an 809-pound mako shark off the coast of Huntington... 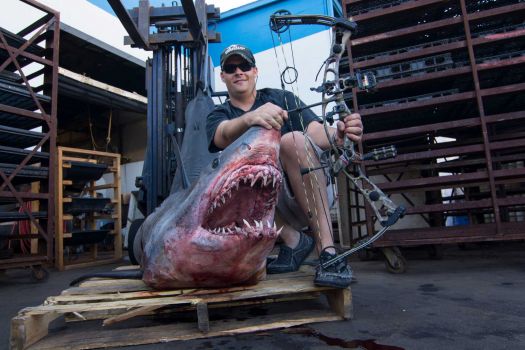 Jeff Thomason, host of Outdoor Channel’s Predator Pursuit, arrowed and landed an 809-pound mako shark off the coast of Huntington Beach, California, in August. According to the Bowfishing Association of America, the 11-foot-long shark beats the previous world bowfishing record mako by 300 pounds, the San Antonio Express News reports. It took five people 30 minutes to haul the shark in.

“We shoot regular AMS bow arrows, but they have an interlock grapple with a steel leader,” Thomason, a Texas native, told the Lone Star Outdoor News. “You need the sharks really close to the boat and out of the water because those arrows are so heavy, they don’t fly far.”

Thomason donated 400 pounds of the shark’s meat to a homeless shelter in Los Angeles. Footage of the catch will be used in an upcoming episode of Predator Pursuit.

According to the Internation Game Fish Association, the world record for a mako shark caught on rod and reel weighed 1,221 pounds and was landed off the coast of Chatham, Mass., in 2001.