Boy Gets Wish for First Deer Hunt Despite Geographical Mix-Up

Early in December, a hopeful fourth grader wrote a letter asking to be considered for the chance to hunt deer... 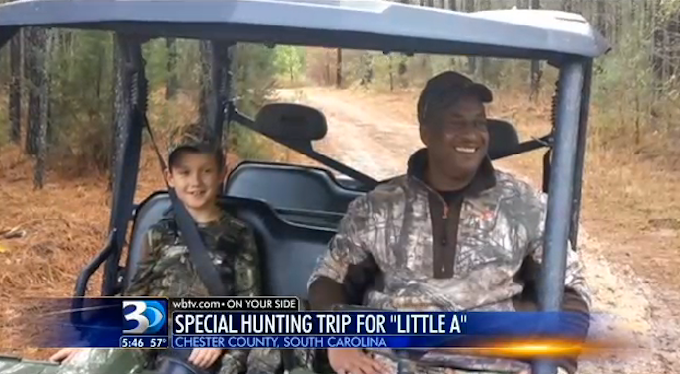 Early in December, a hopeful fourth grader wrote a letter asking to be considered for the chance to hunt deer with the Sheriff of Chester County, after reading about the opportunity on Facebook. Alex Collins, 9, wrote that he’d never had anyone to take him hunting and hand-delivered his letter to the Sheriff’s office. The only problem? Collins lives in Chester County, Pennsylvania, and the invitation for a guided youth hunt came from Sheriff Alex Underwood of Chester County, South Carolina.

The story may have ended there, if not for the kindness of Pennsylvania’s Sheriff Carolyn Bunny Welsh, who contacted Underwood to explain the boy’s innocent mistake. In an inspiring move, the two law enforcement officials worked together to send Collins south and make the hunt happen this Monday.

“I said, if you can get him here, we’ll be glad to take him hunting,” explained Underwood—affectionately known as “Big A”—who met the first-time hunter at the airport with a fleet of patrol cars, according to a Fox Carolina story. Their first stop was a sporting goods store, where Collins was outfitted for his hunt with $220 worth of gear. Donations covered a portion of the cost and Underwood paid for the rest out of his own pocket. In the video below, which chronicles the pair’s morning together, Collins says, “You spent that much on me?”

The hunters didn’t see any deer that day, but the experience certainly made an impression on everyone involved.