Last Thursday, an estimated 35 million gallons of sewage water were released into Montana’s Gallatin River when a pipe below... 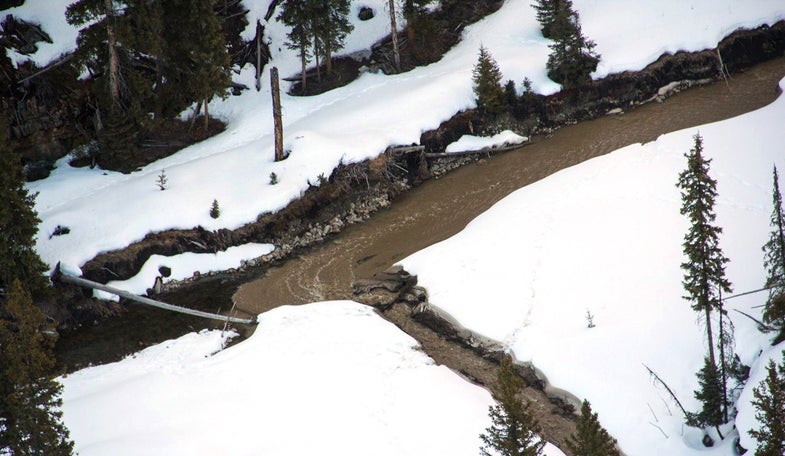 Last Thursday, an estimated 35 million gallons of sewage water were released into Montana’s Gallatin River when a pipe below a holding pond broke. According to the Bozeman Daily Chronicle, the treated water flowed into the West Fork of the Gallatin via Second Yellow Mule Creek from the nearby Yellowstone Club golf course. An employee discovered the broken pipe, which provides irrigation for the golf course. The club then notified the Big Sky Sewer District and the Montana Department of Environmental Quality. Officials with the Department of Environmental Quality said that the spill likely posed no risk to humans, though they are still running tests.

On Sunday, however, the Bozeman Daily Chronicle reported that tests performed by the Upper Missouri River Waterkeeper showed elevated levels of phosphorous, nitrate, and chloride in the river. Guy Alsentzer, executive director of the UMRW, told the paper that the levels were not dangerous, but the sediment flushing into the river is a potential danger to fish. Alsentzer said that such sediment “can suffocate the gills of fish.”

Montana Fish, Wildlife, and Parks biologist Dave Moser, who visited the site on Friday, echoed the sentiment. In addition to affecting the fishes’ gills, the sediment could suffocate the eggs in brown-trout spawning redds that are likely in the path of the spill. Moreover, Bruce Farling, executive director of Trout Unlimited in Missoula, told the _Bozeman Daily Chronicl_e, “That is a lot of sewage, and treatment is in the eye of the beholder. …Nitrogen is a surrogate for all kinds of other bad stuff.”

Court records show that the sewage holding pond had been leaking since at least 2014. In a 2015 report, water commissioner John Morse wrote that, according to Yellowstone Club environmental manager Rich Chandler, “There had once again been some sort of leak and they were doing maintenance to repair the leak.” A spokesperson for the Yellowstone Club told the Bozeman Daily Chronicle that the pond and its pipes were built to the highest standards, and that the pond was monitored continuously.

Explore Big Sky reports that the discharge did not fully cease until yesterday. Also, Explore Big Sky has an extensive photo collection of the spill, which you can see here.