Landing a trophy king salmon, striper, or steelhead is a feat, no doubt. But facing off against a 650-pound sturgeon... 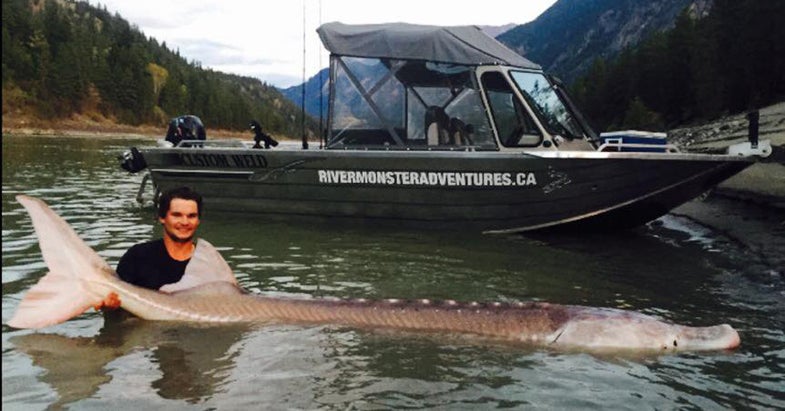 Landing a trophy king salmon, striper, or steelhead is a feat, no doubt. But facing off against a 650-pound sturgeon demands next-level effort, as 19-year-old guide Nick McCabe recently found out.

As Global News reports, the 10-foot sturgeon took McCabe’s bait on the Fraser River near Lillooet, B.C., and McCabe spent the next two hours reeling in the fish. Sturgeon can live between 50 and 150 years, during which time they often garner a reputation among anglers. The sturgeon that McCabe hooked is well-known due to its stumped snout, which earned it the nickname “Pig Nose.”

“He damaged his nose 40 years ago,” Jeff Grimolfson, who works with McCabe at River Monster Adventures, told reporters. “This fish has been the talk of fishing and sporting-goods shops for years.” The cause of the injury is unknown, however.

Pig Nose, which is estimated to be 80 years old, is tagged and microchipped, so McCabe and his crew scanned and released the trophy upon bringing it to hand. Sturgeon are endangered, but catch-and-release fishing is allowed on the Fraser River, so long as anglers use barbless hooks and keep large sturgeon in the water at all times.

The IGFA white sturgeon record is set at only 468 pounds, since keeping the fish is prohibited. Several 1,000-plus-pound specimens have been documented in recent years, but McCabe’s haul is still undoubtedly impressive.