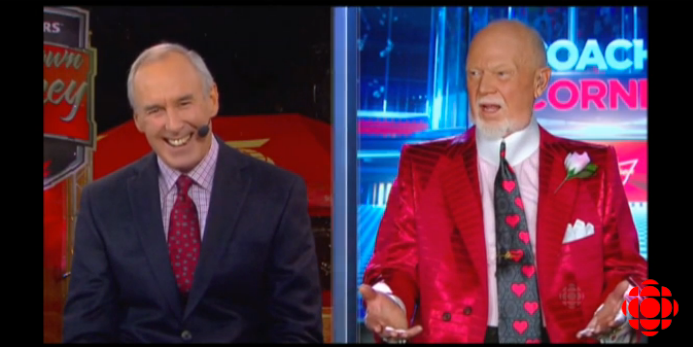 If you’re tired of hearing about Brian Williams, go to Canada. Don Cherry, the legendary hockey coach turned sports commentator, is skating on thin ice this week after airing offhand, demeaning comments about people who hunt and eat seal meat. The 81-year-old Cherry is known for his outspoken candor—and flamboyant attire—on one of the country’s most popular television programs, Hockey Night in Canada.

According to the Canadian Press, the incident took place during Cherry’s Feb. 7 segment of “Coach’s Corner,” when co-host Ron MacLean said he’d eaten a seal-meat burger before appearing via satellite from Newfoundland. Although hunting and serving seal meat is common in that area and among native nations, Cherry feigned offense and asked, “What are you, a savage? A barbarian?” Since the broadcast, his comments have ignited a firestorm of criticism on social media.

“Sealing is important to Inuit culture and tradition,” Environment Minister Leona Aglukkaq posted on Twitter. “Mr. Cherry’s comments last night were hurtful and insensitive. I hope he apologizes. Our government will continue to defend Canada’s humane seal hunt which is so important to many of our Northern and coastal communities.”

Cherry has since made an apology of sorts on Twitter, where he wrote: “I have no problem with my friends who are hunters and eat venison and duck. Just the same as I have no problem with people who hunt seals and seal meat.” His final tweets on the matter left some followers questioning his sincerity and calling for his termination from the show: “I have hurt some people’s feelings that I like and admire. If this explanation isn’t good enough, then let the cards fall where they may.”

“According to Don Cherry, my Inuk friends are savages because they eat seal,” tweeted Matthew Coon Come, former National Chief of the Assembly of First Nations. “The network should fire him for his racist remark.”